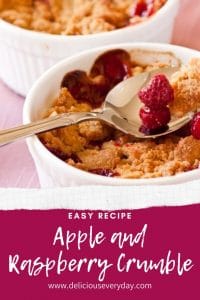 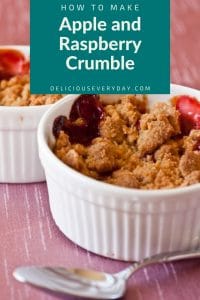 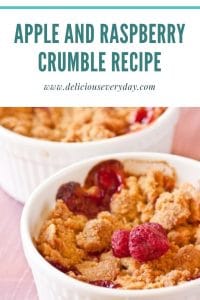 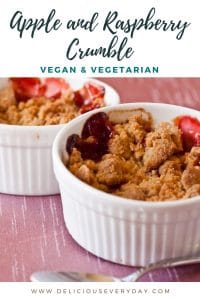 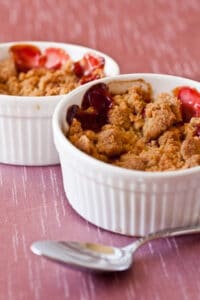 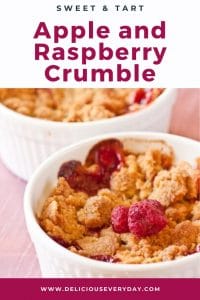 There is nothing more comforting than a sweet and tart apple and raspberry crumble on a cold winters night. Serve with a dollop of cream or ice cream.

I have recently become a fan of Ina Garten, the Barefoot Contessa. Whilst I've had a subscription to the Lifestyle Food channel for a few years, I'll admit I'd never really paid much attention to her show.

I think that's because the list of cooking shows I already watch is rather long. But now having seen it, I know I've been missing out.  I love her easy manner, relaxed style of cooking all the while maintaining an attention to detail.

After watching one of her shows recently I was inspired to put my own spin on her crumble recipe.  Whilst peaches aren't in season here, I was inspired enough to make the recipe using what fruit I had to hand, which was frozen raspberries and apples.

This recipe for apple and raspberry crumble is quick and easy to prepare, which is ideal at the moment given I'm still on crutches.

I made 4 crumbles using the recipe, and my husband and I had one each for dessert one night and planned to have the other after dinner the next night.  But my husband loved the crumble SO much that he found it difficult to resist the urge to go to the kitchen and get a second crumble.

If that isn't a resounding endorsement I don't know what is.  Needless to say, the crumble recipe will become a staple.

I also loved how deliciously crumbly and crunchy the topping was.  I often find crumble recipes don't produce a very crumbly topping.

And this recipe was even better due to the fact the crumble topping was still crumbly and crunchy the next day.

Anyway, back to the Barefoot Contessa.  If you're a fan, I'd be interested to hear what your favorite recipes are? If you're not a fan have you discovered a celebrity chef recently whose cooking you adore?

And if you love this Apple and Raspberry Crumble, be sure to check out these other delicious desserts: 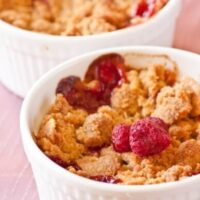