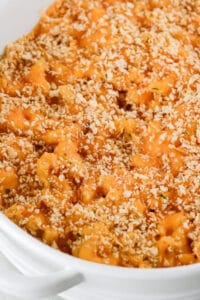 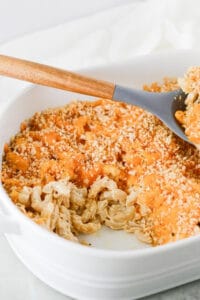 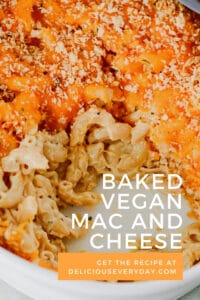 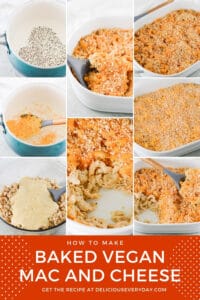 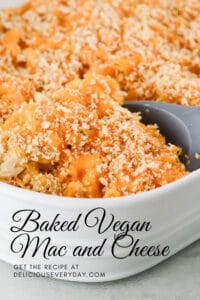 Enjoy a delightfully gooey side or main dish with this Baked Vegan Mac and Cheese. Shredded vegan cheese, coconut milk, and whole wheat pasta come together to make this irresistible plant-based comfort food. It's quick, easy, and only uses a handful of simple ingredients.

I don’t meet very many people who dislike a heaping bowl of mac and cheese. This gooey classic can be eaten as a snack, makes a great side dish, and is hearty enough to be a meal all by itself.

Mac and Cheese is one of the most epic comfort foods, and definitely contends for one of my all-time favorite dishes.

And I absolutely adore making homemade versions of my favorite convenience foods.

For example, these Vegan Ramen Noodles and these Thai Peanut Noodles beat out the packaged and restaurant versions I’ve had, by far.

But I had so many reader requests for a simple version using packaged vegan cheese, that I couldn't resists. And I have to say that this was really easy, and still totally delicious. It's perfect for a weeknight dinner when you don't have time for a lot of fuss.

How to Make Baked Vegan Mac and Cheese

Storage - Store in a sealed container in the fridge for up to 4 days. I’m not a fan of this dish after it’s frozen. If you don’t mind a slight texture change in the vegan cheese, you can definitely freeze it. Freeze it in an airtight container for up to 2 months.

Reheating - Reheat in the microwave or in the oven. If frozen, you can rush the thawing by throwing it in the oven or let it thaw on its own.

Change the topping - You can use other options for your topping if you prefer. Other flavors of bread crumbs, crushed crackers, or even no topping at all is fine as well.

Add more vegan cheese - If you want even more cheese, you can add more cheese to the top before baking. You can also add a bit more coconut milk if you prefer a thinner sauce.

Add onion - If you want even more flavor in your homemade vegan mac and cheese , you can dice some onion and saute them before adding the coconut milk to the sauce.

Use other vegan cheese options - As long as you choose a dairy-free cheese that will melt and stir into the coconut milk, you can use it in this recipe! You don’t have to use a cheddar replacement. Experiment with other flavors of vegan cheese and make it your own.

In my experience, Follow Your Heart and Daiya are the best brands for recipes that require melting the vegan cheese (like this one!).

If you've found another brand that melts well, I would love to hear in the comments.

Is Kraft Mac and Cheese Vegan?

Kraft’s mac and cheese is not vegan. Vegan means that zero ingredients that come from an animal were used in the recipe. Kraft boasts that real milk and cheese are used in their recipe. This means it’s not vegan. Their pasta itself is vegan since most pasta is. It’s just the cheese powder that isn’t vegan, if you want to get specific.

This recipe tastes very much like normal mac and cheese. The great thing about vegan shredded cheese is that it tastes very similar to the real thing.

Some other recipes use veggies to make a "cheese" sauce. And while many of them are delicious dishes in their own right, they don't taste quite as much like real cheese. At least in my opinio.

If you love this baked vegan mac and cheese, here are a few other dishes you might enjoy. 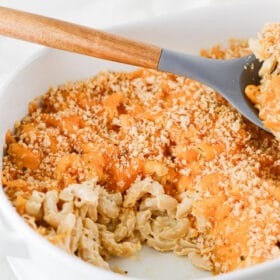