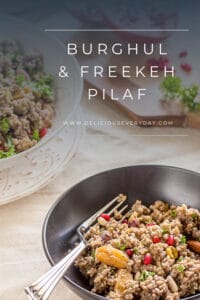 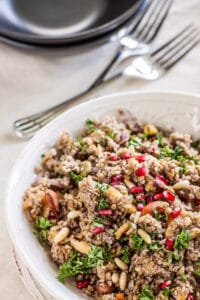 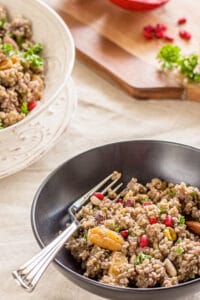 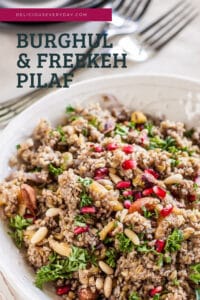 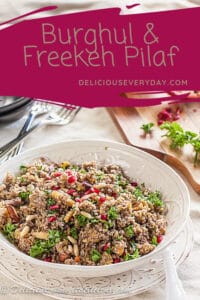 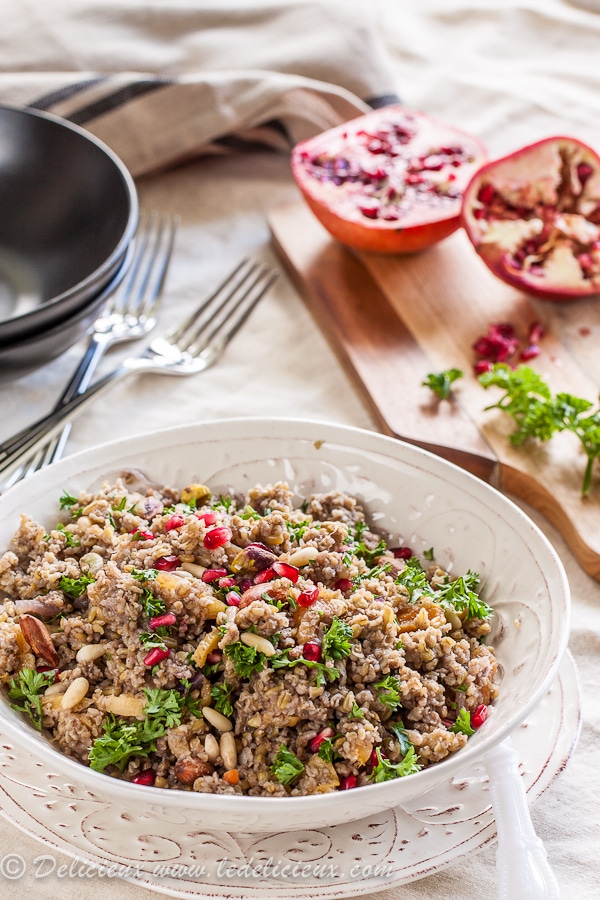 This beautiful pilaf is the second recipe from Modern Flavours of Arabia that I chose to cook as part of my cookbook review. While burghul is familiar to me, and I think most people, especially those who are fans of tabbouleh, freekeh is a grain I had yet to try. A couple of months ago I spotted some at one of my favourite grocers and grabbed a box knowing I wanted to try it, but it was soon relegated to the back of the pantry. However as soon as I saw the recipe for Burghul and Freekah Pilaf I remembered the forgotten box of freekeh.

Freekeh, pronounced free-ka, dates back to 2,300 BC when a city in the Mediterranean prepared their city for to be under siege. In preparation, and knowing they would be unable to tend to their fields, they picked the green heads of their wheat crops and stored them to fight off starvation. Unfortunately the wheat store caught fire, but after the fire was put out it was discovered that if they rubbed the heads of the charred wheat the green grains underneath were remained, which they called 'freekeh', meaning 'the rubbed one'.  Ever since Freekeh has been enjoyed as a delicious and nutritious grain. It is low GI, low carb, high in fibre (it has up to four times more fibre than brown rice) and is low in fat. 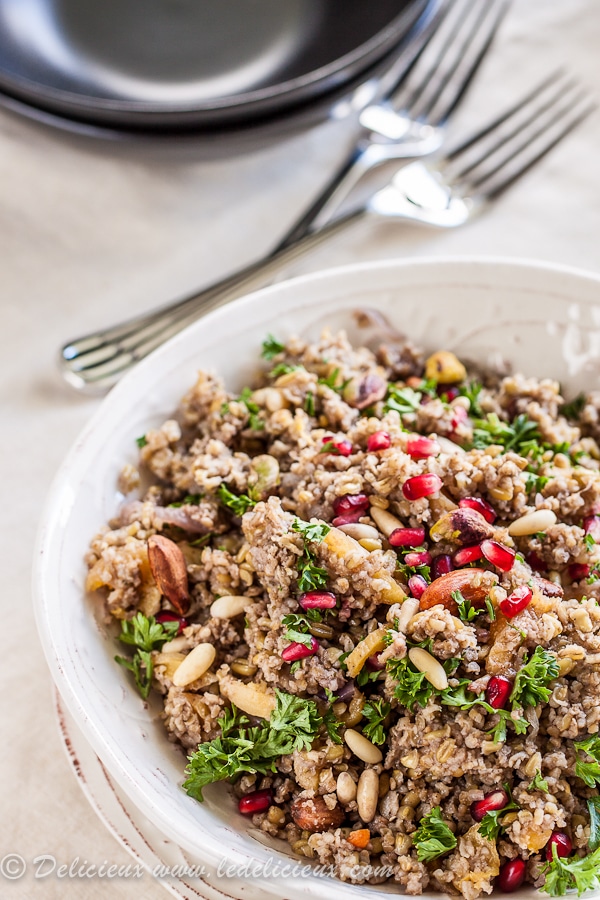 Interestingly Freekeh refers to the process of roasting grains and not a particular variety of grain, and producers have been experimenting with making freekeh from a variety of different grains including barley. Another benefit of Freekeh, apart from being delicious and nutritious is that it is extremely easy to cook and is even more forgiving than rice, and just like rice it quickly increases in volume, making it economical too. Simply add 1 cup of cracked Freekeh to 2 and a half cups of water and boil on the stove for 15 minutes and it's ready.

Making this pilaf is just as easy. I have to admit though that while I was keen to try this recipe, I wasn't completely sure whether I would like it given the combination of fruits and nuts, but it was delicious, and I found it was even better the next day, once the flavours had a chance to develop further. Serve this pilaf as a side dish, or a delicious healthy lunch.

If you are interested in trying Freekeh, or Burghul for that matter, and looking for recipes, don't forget to enter my Modern Flavours of Arabia give away where you can win a copy of this beautiful book.

So tell me, have you tried Freekeh before? 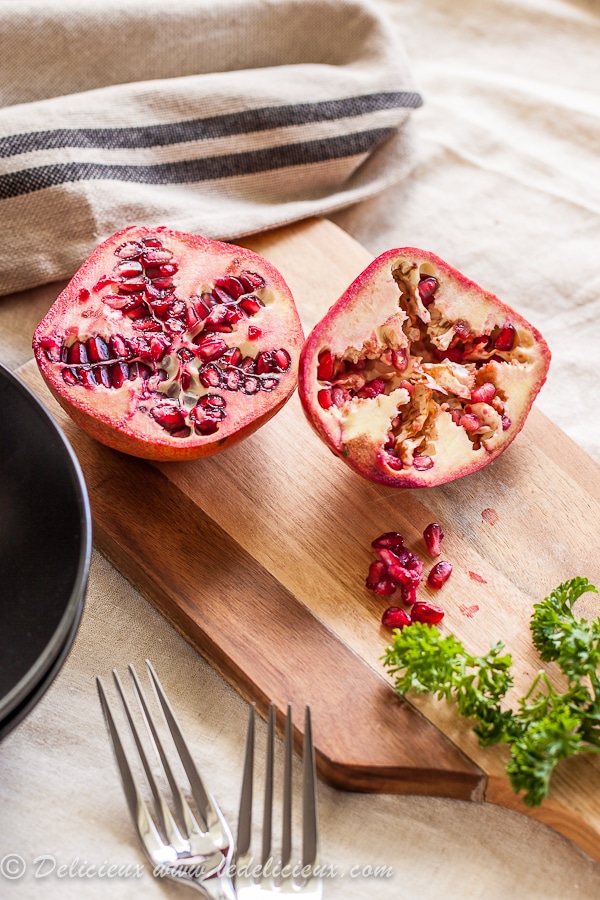 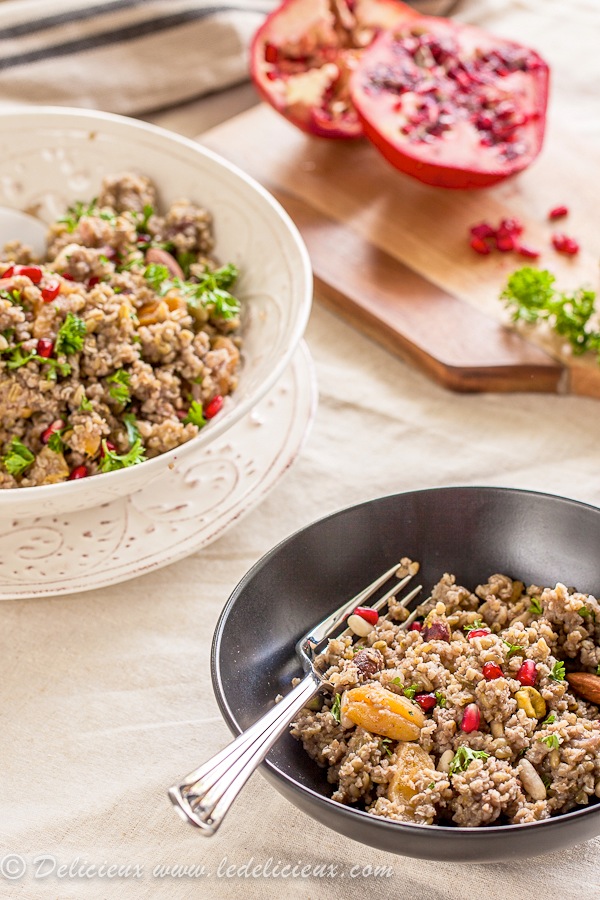 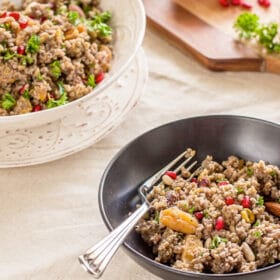