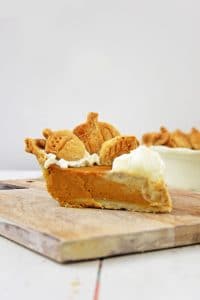 This is the best pumpkin pie ever -- and I can’t wait to make it this year! It’s the star of our Thanksgiving dessert buffet every holiday season - creamy, rich pumpkin custard wrapped in flaky pastry crust. So simple and delicious!

Let's start with the crust!

Of course you can use a store-bought pie crust if you prefer. But c’mon it’s the holidays, so it’s better to make this with my homemade pie crust. It’s much easier than you think, I promise!

Don’t worry when your cutting the Crisco into the dry ingredients, you’re really only breaking it into small pieces.

It’s a technique to quickly combine the ingredients together so that the shortening or fat does not melt. This is what gives you a beautiful flaky crust.

Next, in a 1 cup measuring cup, beat the egg until lightly colored and frothy.  Add in the white vinegar and stir. Add water until you fill the measuring cup, stir well and pour into the flour and Crisco mixture.

Mix the dough just until it comes together and forms into a ball when you squeeze it in your hand.

Use a large spoon to mix, try not to use your hands too much when making the dough.

Your hands can be warm and will quickly melt the shortening. Add more flour if the dough is too sticky.

Cut the dough in half and flatten each into two discs.  Wrap the dough in plastic wrap and refrigerate for at least one hour to allow it to rest.

Remove them from the refrigerator, when you’re ready to roll out your dough. Lightly flour  a large piece of parchment paper and your rolling.

Place the dough on the parchment paper and gently roll it from the center out, applying even pressure and turning the dough a quarter turn after a few rolls. Sprinkle more flour on your surface to prevent the dough from sticking.

You’d want to roll until the dough is about three or four inches bigger than your pie pan, this will leave you with enough dough to crimp edges.

Here’s a video for different ways to decorate the edges of the dough.

After rolling out the pie crust, transfer it into your pie pan, then trim and crimp the edges. Set aside

As for the pumpkin pie filling, it’s as easy as combining the wet and dry ingredients in one bowl, then mixing it all together.

For the pumpkin pie custard, I always make sure to use a plain pureed pumpkin as my base - the only ingredient on the can should be pumpkin.

This is so I can control the flavor and how sweet I want the filing to be, rather than relying on a pre-seasoned pie filling.

I add a tad of cinnamon as my spice of choice to give the pie that traditional pumpkin pie flavor. Feel free to use the spices you love, like nutmeg, ginger and cloves.

For just a touch of sweetness with less added sugar, you can use brown sugar or molasses in the recipe instead of granulated sugar to add a little extra caramel-y flavor.

The eggs and half and half will help to thicken the filling a bit.

Bake the pie at 425°F for about 20 minutes, then lower the oven temperature to 350°F and bake for another 45 minutes.

Reducing the oven temperature will avoid over baking the custard and prevent cracks in your pumpkin pie.

It’s best to remove the pie while the center is still a little wobbly.  The heat will continue to cook the pie when it’s out of the oven and the center will finish cooking and firm up as you let it set and cool down.

What is the difference between canned pumpkin puree and pumpkin pie filling?

Canned pumpkin is nothing more than plain cooked, pureed pumpkin. The only ingredient on the label should be pumpkin.

Pumpkin pie filling, on the other hand, has spices like cinnamon, clove, allspice and ginger added for extra flavor and often sugar to sweeten.

Why is my pumpkin pie mushy?

It can happen to us all! You followed the recipe to the letter but when you checked with a toothpick, the inside wasn’t set at all. It’s mushy! What did you do wrong? Why didn’t the filling set?

There are many reasons why your pumpkin pie might be mushy:

These are my recommendations to saving a mushy pumpkin pie:

To firm up an already baked pumpkin pie, leave it to set in the fridge for about 12 hours. The pumpkin custard will firm up and become cold.

For not yet baked pumpkin pies, adding more eggs to the recipe is a good idea. Pumpkin pie filling is a custard and like all custards, eggs are essential to help it hold its shape.  Whatever the recipe calls for, increase by one egg if you're having trouble.

Don’t dock the dough. You want to avoid adding numerous small holes in the dough which will cause the uncooked pie filling to seep on the bottom and create a soggy crust.

Make sure you bake it just enough. Remove the pumpkin pie from the oven while there is still a little jiggle in the center. The filling will continue to cook after removing it from the oven.

You can simply top the pie with heaping piles of whipped cream and serve immediately, but if you have extra dough which you rolled out earlier, you can use them to make little crust cookies to add something special.

Just grab some pie crust cutters (like this set), cut out as many leaves, acorns and pumpkin shapes that you need.

You’ll want to bake these crust cookies separately as they cook quicker than the actual pumpkin pie. Pop them into a 350°F for about 10-12 minutes or until golden in color.

Brush with melted butter or sprinkle with colored or cinnamon sugar or dip in white chocolate tinted with various food coloring gels for a burst of fall colors.

If you love this pumpkin pie recipe, be sure to check out these other tasty treats:

If you're here planning a meatless holiday menu, be sure to check out our new Vegan Thanksgiving and Vegan Christmas Cookbooks too! 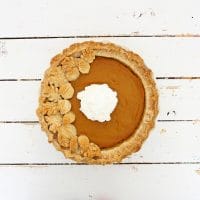 FOR THE PIE FILLING:

FOR THE DECORATIVE EDGES (optional):

Shop our Cookbooks!Check out our collection of vegetarian and vegan cookbooks for more tasty meatless recipe ideas.