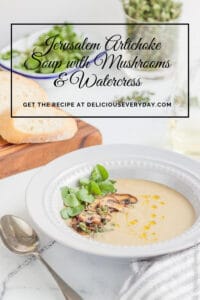 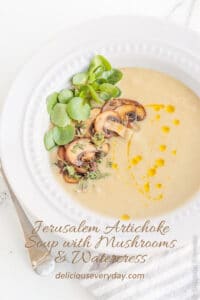 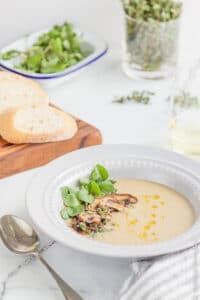 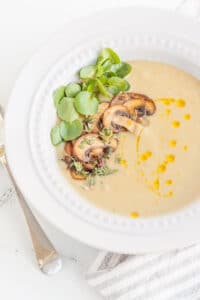 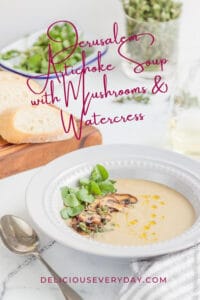 Jerusalem Artichokes may not be much to look at, but beneath that knobbly exterior is a nutty, sweet and earthy treat. This velvety smooth Jerusalem Artichoke Soup is topped with mushrooms and watercress for an easy one-bowl meal.

Jerusalem Artichokes, also called Sunchokes, are a member of the sunflower family, and resemble nothing of the green flowering Globe Artichokes that they happen to share a name with.

Gnarly and knobby, just like ginger, they aren't the prettiest thing out there, but these root vegetables are so worth getting your hands on if you can.

Cut into a Jeruslam Artichoke, and the texture is similar to water chestnuts, while the creamy flesh has a slightly sweet and earthy flavor with just a slight smokiness.

This earthy sweetness works beautifully in this Jerusalem Artichoke Soup, where it's paired with earthy mushrooms and the slight pepperiness of watercress.

It's quickly become one of my family's favorite vegan soup recipes.

And it's even vegetarian and vegan-friendly too!

If you don't feel like frying up mushrooms, a little truffle oil (I like this brand!) would be fantastic drizzled on top.

I've used some potato in this soup to balance out the earthiness of the artichokes. But if you love bolder flavors, feel free to replace the potato with more artichoke.

And for more delicious recipes, don't forget to grab a free copy of my Top 15 Reader-Favorite Recipes before you go!