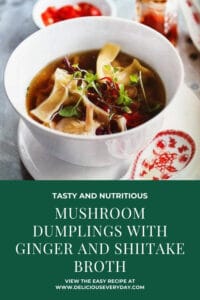 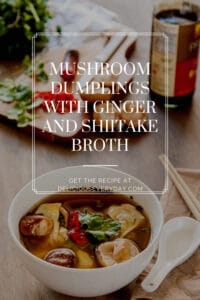 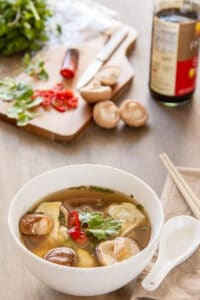 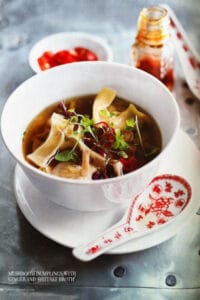 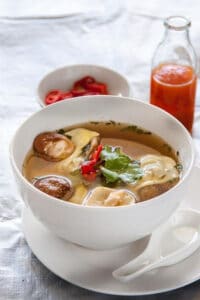 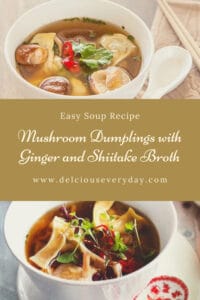 Each month Simone at Jungle Frog Cooking hosts a Donna Hay photography and styling challenge. The goal of the challenge is to try to reproduce an image from Donna Hay magazine and to learn and have some fun along the way.  I've always loved seeing everyone's submissions and this month the challenge was to reproduce the Mushroom Dumplings with Ginger and Shiitake Broth photo from the Autumn 2012 edition. So I finally decided I'd have a go myself, especially considering the main ingredient is mushrooms, which you all know I adore. 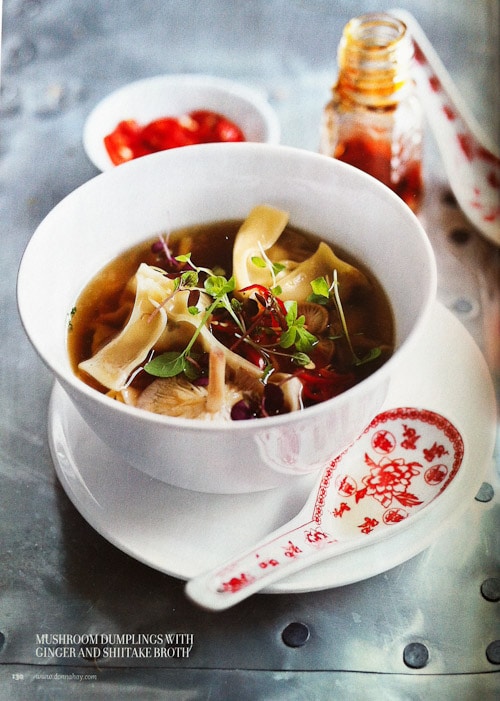 The main goal of participating in this challenge for me is to learn more about food photography, and who better to learn from than the amazingly talented team that work on Donna Hay magazine. The original photo, above, which appeared in the magazine was taken by Chris Court, and on the surface the styling is very clean and simple, which Donna is synonymous with, but reproducing the same results at home I found to be a challenge.
Firstly I didn't have a background similar to what was used in the photo. I tried using the back of a large stainless steel tray I had but the tray was too small, and in lieu of purchasing a background just for this photo I decided to use a grey tablecloth I had. Secondly I couldn't find the micro herbs used as garnish so went with a garnish of coriander and chilli. Finally, I found it difficult to position the dumplings in a similar way to the photo. By the time I'd moved them a few times my dumplings started to fall apart and some of the filling leeched into the broth. In the end I had to use some of the shiitakes in the broth to keep the dumplings together. Nevertheless I decided to proceed because after all the goal is to learn.
So, here is my version below. To be honest, I'm not very happy with it, but I certainly did learn along the way. Anyway, what do you think of my attempt?

Finally, I decided to take some photos of the broth the way I would style it. 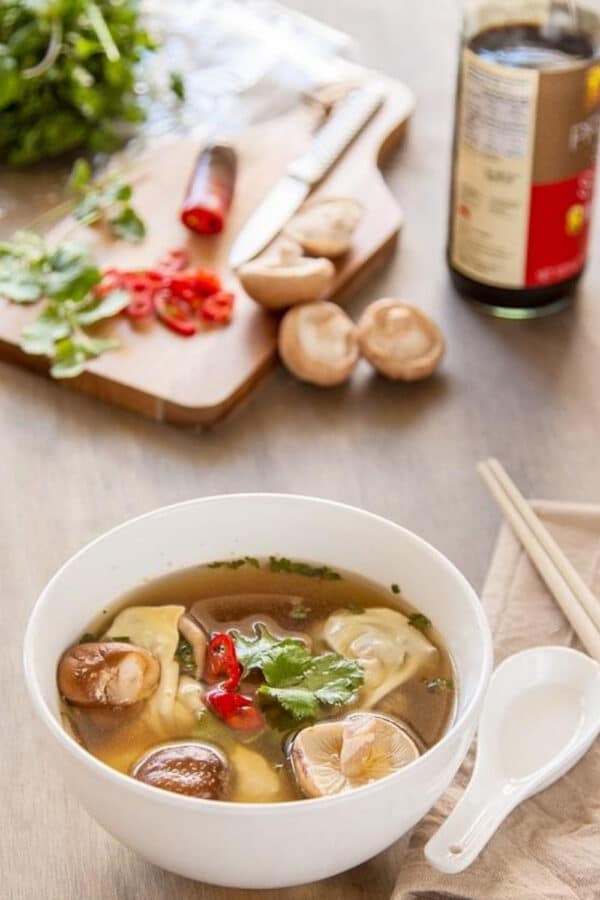 All in all, this was a fun challenge, and I look forward to participating again in the future.

So how does the soup taste?

Fantastic actually, although I had to change the original recipe a little to make it vegetarian and also due to the lack of availability of some ingredients.

Even my husband - who before we met hated mushrooms and but has come to enjoy them over the years since we've been together, although his tolerance for anything too mushroomy is limited - loved it.

I will definitely make this Mushroom Dumplings with Ginger and Shiitake Broth recipe again. However, I will make a few changes to suit our tastes. Specifically the dumplings, which while I found cute in their pyramid shape they were too big to eat gracefully. I think next time I will make little dumpling purses. Finally, just before serving I added some chopped choy sum for a bit of greenery and textural difference. 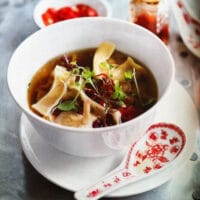 The original dumpling recipe called for galangal in place of the ginger, however I couldn't get hold of galangal. It also called for Chinese black vinegar in place of the rice wine vinegar I used. Dried shiitake mushrooms are available in the international food section of your supermarket otherwise try an Asian grocer.