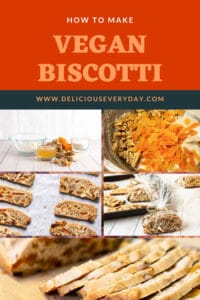 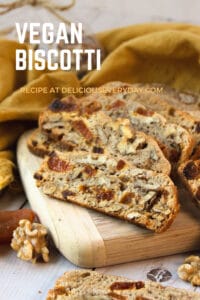 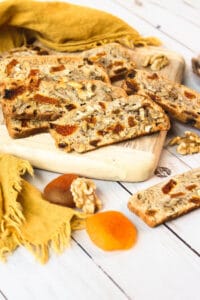 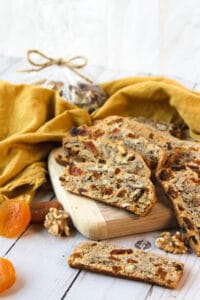 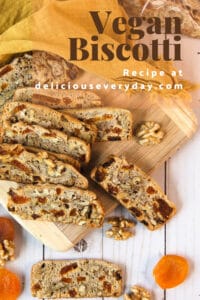 These Vegan Biscotti are simple to make and packed with flavor from apricots and walnuts. They're perfect for dunking in coffee and make beautiful foodie gifts!

Growing up, biscotti were always one of my favorite treats. I know—weird treat for a kid, huh? I'll blame that one on my Italian upbringing.

But until recently, I had never tried to make them myself. I am happy to tell you that it's not nearly as hard as you think to make your own homemade biscotti!

I think these are going to be my new favorite vegan cookies.

These biscuits remind me a lot of the popular Almondina brand biscotti—but they're made with fresh ingredients from scratch.

And better yet—they've been veganized so everyone can enjoy this special dessert. So grab yourself a coffee (like this whipped coffee) and let's dig in!

This Vegan Biscotti recipe is:

These biscotti also make for great holiday gifts. Just put a few in a bag and tie it closed with a decorative ribbon.

If you love vegan baking, make sure you grab a copy of my free vegan baking cheat sheet while you're here. It's packed with all my favorite plant-based substitutions to help you vegan-ize any recipe!

How to Make Vegan Biscotti

Aquafaba is a thick water that you can find in a can of chickpeas, and other canned beans. It's a thick and viscous liquid - but it is like gold for vegan baking.

It works well for whisking into a thick base for this biscotti dough. But it's also great for other vegan recipes—like this Vegan Chocolate Mousse or this Vegan Wellington.

For this recipe, you’ll want to use raw walnuts, so that the walnuts don’t get overcooked during the second bake.

Once you’ve baked your biscotti the second time and then let them cool, you can dip them into melted chocolate. Just grab some dark chocolate chips, put them in a small bowl, and microwave in 30 second increments until melted. Then dip away!

After dipping the vegan biscotti, place them on wax paper and put them in the freezer to harden. When you store them, just make sure it’s in a place that’s room temperature or cooler so that the chocolate doesn’t melt.

To add extra flavor to your biscotti, you can add a drop or two of flavored extract for flavor. Some extract flavors you might try are orange, mint, almond, vanilla, or lemon.

Mix Up the Nuts & Fruits

You can substitute the walnuts and apricot for other nuts and dried fruits of your choice. The classic biscotti, Almondina, for instance uses almonds and raisins.

What is the difference between biscotti and cantucci?

Cantucci are Italian almond cookies and biscotti is the general term for “cookies” in Italian. They are made similarly, but cantucci are distinctly made with almonds. The cookies commonly referred to as biscotti come in more variations.

How do I make biscotti harder?

If you want to make your biscotti harder, just keep them in the oven for a bit longer. But watch them so they don’t burn! You want the to cook evenly on both sides.

How do I soften biscotti?

If your biscotti are too hard after baking, just pop them into the microwave for up to 30 seconds before eating them.

Are you supposed to dip biscotti in coffee?

Yes! Biscotti are designed to fit into your mug. They’re crunchy, but soften when dipped into coffee. I've been enjoying me with dalgona coffee recently.

Because you bake them twice, no liquid remains in the cookies. So there are no worries about mold. Store them in a cool place, or you can refrigerate or freeze them. They will stay fresh for up to 1 month in an airtight container.

If you love these vegan biscotti cookies, be sure to check out these other delicious vegan desserts. 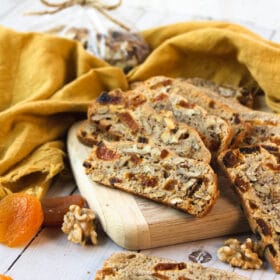 See article above for tips, tricks, and variations.