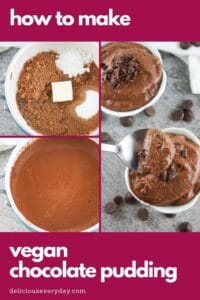 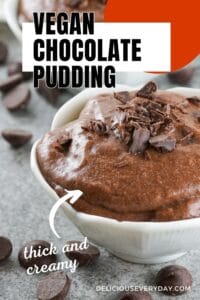 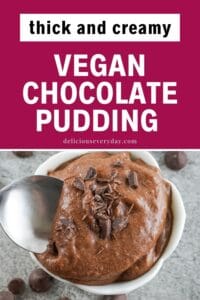 Skip the boxed brands and make this decadent Vegan Chocolate Pudding instead. Made rich with cocoa powder and cashew milk, you’ll melt with every bite. This pudding is thick and creamy, perfect for any occasion or to even use for pies!

Something that pretty much everyone on this planet loves is chocolate pudding. It is a great snack, dessert, and can even be used as an ingredient for a slew of other desserts! My Vegan Chocolate Pudding retains the reputation of thick, fluffy and delicious pudding. The ingredients are very simple and the steps are as easy as it gets.

Vegan Chocolate Pudding has quickly become the kids’ favorite dessert. I find myself making it often because it’s an easy-to-please dessert. I find it tastes best when following a lighter dinner like Vegetarian Burrito Bowls or some Vegan Ramen Noodles.

It is a great recipe to make while dinner is being cooked. It is also great as a snack if you have leftovers! I’ve even used it to stuff some vegan donuts before. This is definitely a great recipe to have on hand.

How to Make Vegan Chocolate Pudding

A lot of store bought pudding mixes these days are vegan. Where the issue occurs is the milk. It is generally a necessary ingredient to get your pudding to thicken up like you are used to. My recipe is totally vegan and has the taste and fluffiness we all know and love about chocolate pudding while still being cruelty-free!

What is Vegan Chocolate?

Vegan chocolate is any chocolate made without using any animal products, such as milk or eggs. Generally, chocolate made with fewer ingredients is a good place to start looking. Darker chocolate tends to be a pretty safe area as well. This is because there is less added to it, in general.

There are a variety of brands that market their chocolates as vegan and are almost always a safe option to choose. Of course, if you’re vigilant, I would check the ingredients and ensure the product you’re buying is actually vegan. Sadly, it can be marketed as vegan, but that doesn’t always mean it’s fully vegan.

If you decided to give this Vegan Chocolate Pudding a try, please let me know in the comments below or on social media!

While you're here, don't forget to grab a copy of my free vegan toolkit. It's packed with my reader-favorite recipes, cheat sheets, and more. 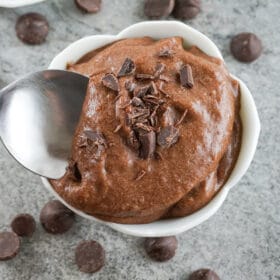