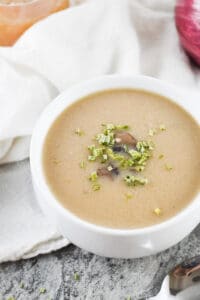 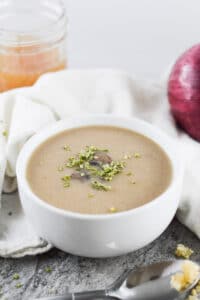 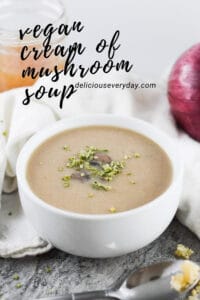 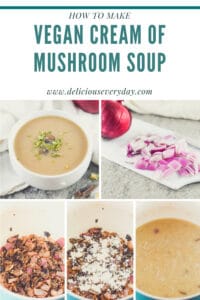 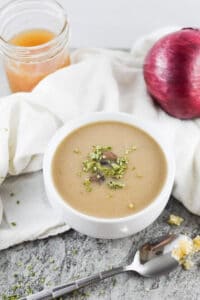 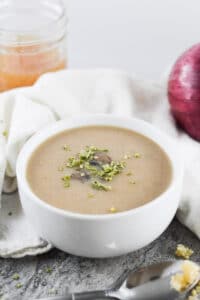 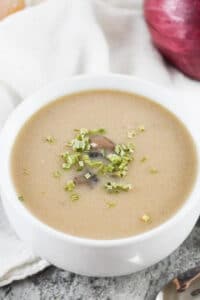 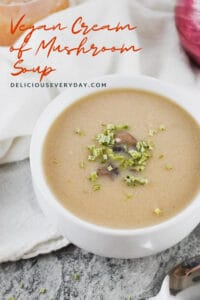 This Vegan Cream of Mushroom soup is comfort food at it's best. It's a one pot vegan meal, that's so creamy and delicious, no one would every guess it's entirely plant based. And it's ready in under 30 minutes!

I have come to realize that not many people eat the “cream of” soups by themselves. They’re more popularly used to make other types of recipes, like casseroles.

But those folks are missing out, because cream of mushroom soup is really good all on its own. And this homemade vegan-ized version is heads above the canned variety that you grew up on.

This is the latest addition to my vegan soup collection, and I have a feeling it's going to be a new family favorite. We pretty much love any recipe starring mushrooms around here! (This creamy mushroom pasta is a long time favorite.)

It's a simple recipe, packed with lots of rich flavor, and a delicious creaminess. This is comfort food at it's best.

This vegan cream of mushroom soup is:

How to Make Vegan Cream of Mushroom Soup

Make it thicker - If you prefer a thicker soup, you can always reduce the broth by about ½ cup. If you want to thicken the soup after cooking, make a cornstarch slurry and stir that into the soup. Then cook for a few more minutes to thicken.

Make it thinner - If your soup somehow ends up too thick for your liking, simply add more vegetable broth until the desired consistency is reached. You will want to adjust the seasonings to taste afterwards.

Use fresh herbs - Give your soup a boost of flavor by adding fresh herbs like thyme or rosemary.

Top with coconut cream - To give your soup a gorgeous presentation, give it an extra swirl of coconut cream when serving. This helps cool the soup down a touch as well.

Try a less creamy version. - If you love this cream of mushroom soup, be sure to check out this other vegan mushroom soup as well. It's not as creamy, but is still loaded with fresh mushrooms and tons of flavor.

How do you store the mushroom soup?

How do you reheat mushroom soup?

When reheating from the freezer, allow thes soup to thaw, then heat it over the stove or in the microwave.

What Goes with Cream of Mushroom Soup?

What’s great about cream of mushroom soup is that it can be eaten alone, served as a side, or used in other main courses.

If you’re serving it as the main course, a delicious salad like this Celery & Apple Walnut Salad, Moroccan Carrot Salad, or Zucchini Noodle Salad would be perfect.

If you’re serving it as a side, it would pair quite nicely with this Vegan Mushroom Wellington for a special meal.

Is Cream of Mushroom Soup Healthy?

Well that depends on the recipe. The canned cream of mushroom soups are generally not very healthy - they contain a lot of sodium and processed ingredients. However, this homemade version is full of fresh and healthy ingredients!

If you love this vegan cream of mushroom soup, be sure to check out these other great soup recipes: 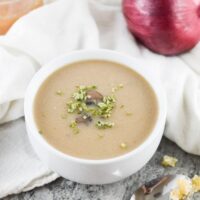