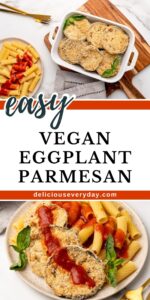 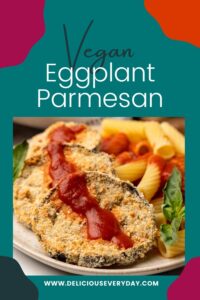 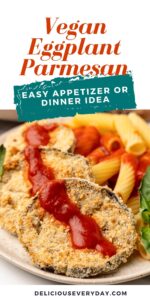 Vegan Eggplant Parmesan is an easy and delicious dinner idea. A 30 minute dinner that is a breaded eggplant that is baked until crispy. Top with your favorite marinara sauce and pair with a side of pasta.

This vegan eggplant parmesan recipe is so simple to make, and you might have all the ingredients on hand already.

Also make sure to check out these other vegan pasta recipes to whip up. Check out my grilled eggplant or this miso eggplant recipe as well if you enjoy eggplant.

This Vegan Eggplant Parmesan Recipe Is...

How to Make Vegan Eggplant Parmesan

Full steps and directions on how to make vegan eggplant parmesan are printed in the recipe card at the bottom of the post. This is a quick walk through.

When you go to slice your eggplant I recommend cutting into ¼ inch rounds. Try to keep them even in size that way they bake up evenly.

Make sure that you flip your eggplant half way through the baking process. It is important to do this so both sides will have a nice crispy texture.

Making sure to salt the sliced eggplant and then placing it between paper towels is key. Placing a heavy item like a cast iron skillet on top helps even more to release excess water. If you skip this step your eggplant can release so much liquid it causes the breading to fall off.

So I used a mix of bread crumbs and Panko bread crumbs. Feel free to use one or the other if you don't want to use both for this recipe.

Instead of breadcrumbs you can crush up crackers into a fine dust and use to coat the eggplant for a tasty coating.

Almond milk is what I chose and you can easily swap it out with any of your favorite plant based milk. The milk is needed to help ensure the breading sticks to the eggplant nicely.

How to remove the bitterness from eggplant?

Salting and allowing your sliced eggplant to release excess liquid will help a bit in getting rid of some of the excess bitterness in the purple vegetable.

Can you eat the peel on eggplant?

Eggplant can be peeled or you can leave the skin on. The whole eggplant is edible so it is whatever your personal preference is in terms of texture.

How to store leftover eggplant parmesan?

You can take any leftovers you have in an airtight container and store for 2-3 days in the fridge. You will find the crispy texture will then be softened but overall it will taste just as delicious. 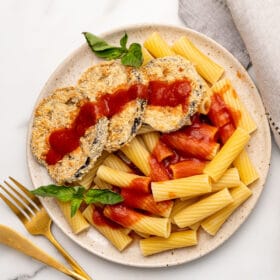 More All the Recipes