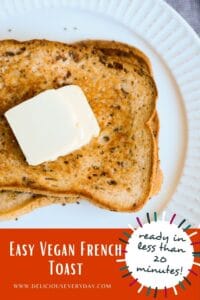 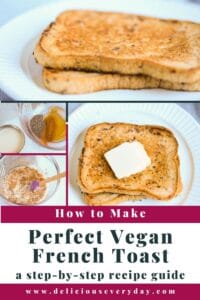 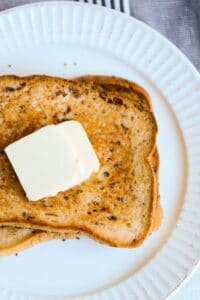 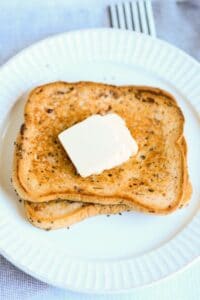 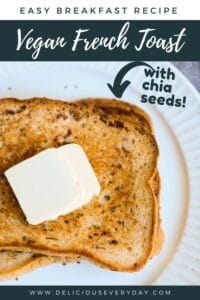 This easy vegan french toast puts a healthy, plant-based twist on the classic recipe. It’s super easy to make in less than 20 minutes, and so delightfully delicious that it just might become your new favorite vegan breakfast.

In our family, we have a long-standing tradition of cooking a big breakfast together on the weekend.

So I'm always on the lookout for creative new vegan breakfast ideas!

If you’re looking for a new recipe for your own lazy weekend breakfast, this vegan French toast is a really delicious and simple way to start your day.

This vegan french toast recipe is:

I’ll even dare to say it tastes better than the traditional version! 😉

And before we get to the recipe - don't forget to grab a copy of my free vegan baking cheat sheet too! It's packed with my favorite easy substitutions to help you make just about any recipe vegan!

How to Make Vegan French Toast

First, we'll need to mix up our simple eggless custard for dipping our bread.

Start by stirring together your almond milk and the chia seeds.

Next, add a bit of vanilla, cinnamon, and maple syrup. Mix everything until well combined.

A little trick I recommend here is to let the milk and chia seeds mixture sit for awhile to firm up before moving onto the next step.

It takes a good 10-15 minutes for the chia seeds to activate, so letting it sit a bit will help to thicken the batter.

But don’t let it sit any longer than 10-15 minutes or it will turn into pudding. You’re basically looking for something that resembles the eggy-creamy custard of traditional french toast batter.

So what bread should you use for this vegan french toast?

You need a really good, thick, sturdy bread here to soak up the liquid mixture without it getting soggy and falling apart when you cook it.

I found that heartier breads are better - something that’s a little dense, with a spongy texture will hold up very well.

I also find that using slightly stale bread works well, because it prevents the bread from becoming too soggy in the center.

(Just be sure to check the label on your bread if you want to keep things vegan.)

Dip each slice of bread into the milk and chia mixture.

It’s important that you let the bread stand in the creamy chia custard until it gets fully saturated.

The bread needs a good soak in the mixture in order to make it soft and fluffy on the inside and crispy on the outside, just like classic french toast.

Cook your vegan french toast on a griddle or a large non-stick pan, over medium-high temperature. Coat the pan with a bit of olive oil spray or vegan butter.

Then cook the french toast slices for about 2-4 minutes on each side, or until they are golden brown without burning on the outside.

How to Serve Vegan French Toast

What do you eat french toast with?

You can simply serve this with a few pats of vegan butter and a drizzle of maple syrup.

Or try stuffing your vegan french toast with some creamy peanut butter and banana slices. So yummy!

This would also be delicious with some fresh berries or a dollop of whipped coconut cream.

I love having mine alongside a delicious Dalgona Whipped Coffee, for a totally indulgent treat.

If you love this recipe, make sure you check out my other favorite vegan breakfast ideas too. 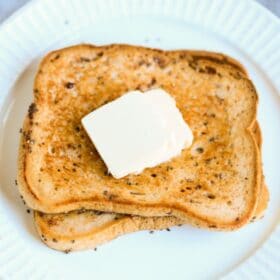