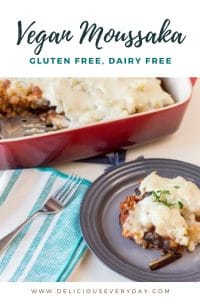 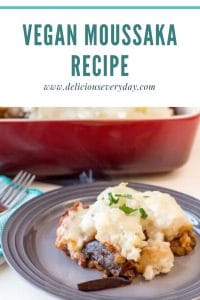 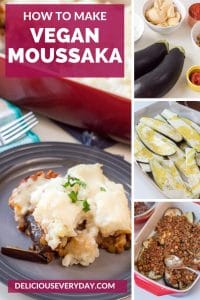 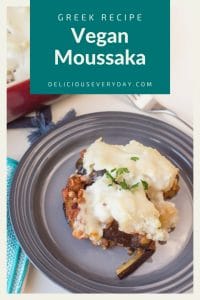 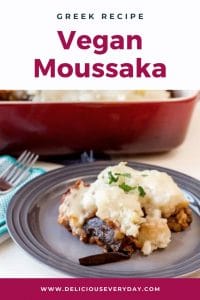 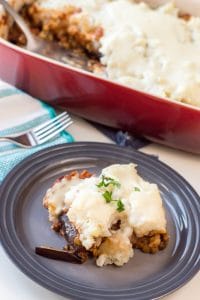 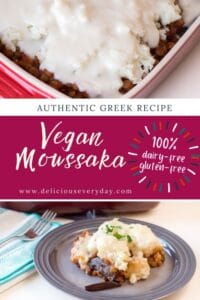 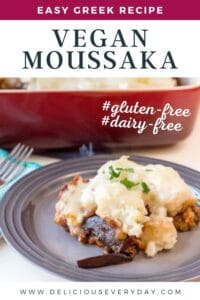 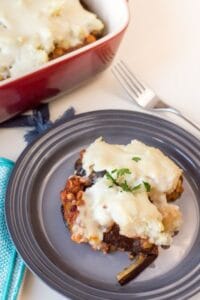 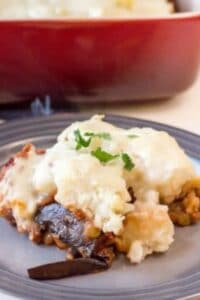 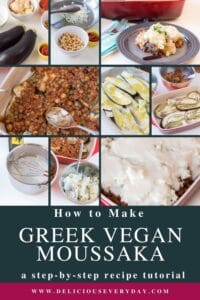 This vegan moussaka is Greek comfort food at its finest. It's loaded with flavor from layers of roasted eggplant, fluffy mashed potatoes, nutrition-packed lentils and chickpeas, and a creamy vegan Bechamel sauce. Dig in! 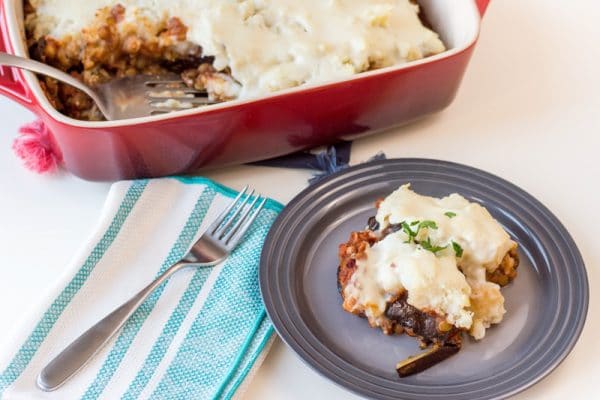 Moussaka is a popular dish found all over the Mediterranean and Middle East, with many variations depending on the country where it's served.

I was lucky enough to spend some time in Greece this past year, researching the food and recipes of the region. And wow - there is so much amazing vegan Greek food! I'll be adding a ton more recipes inspired by the trip soon.

One dish that was found on just about every single menu in Crete was moussaka.

What is moussaka? Well, typically it's made from layers of fried eggplant, potatoes, and meat - all topped off with a creamy Bechemal sauce.

It was wildly popular among the locals in Crete. But sadly, finding a vegan version isn't very easy - no matter what country you're in.

But a dish that's so crucial to Greek cuisine shouldn't be off limits for vegans, so I started experimenting until I came up with my very own 100% vegan moussaka.

It's loaded with eggplant, lentils, and potatoes. And I think it's better than the classic.

This vegan moussaka is: 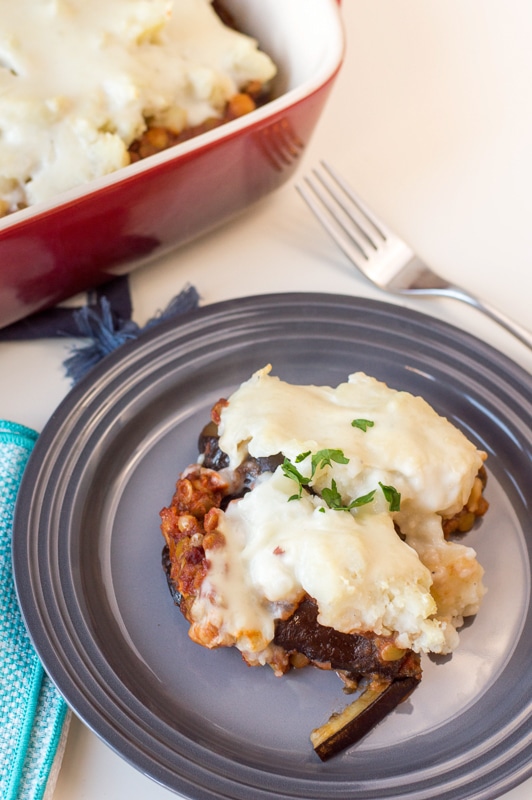 To make this vegan moussaka, it only takes a little bit of tweaking from the traditional version.

The classic recipe would use milk or cream to prepare both the potatoes and the Bechemal sauce. We make an easy swap, and use almond milk instead.

You can use your own favorite plant-based milk such as rice milk, hemp milk, or even  coconut milk. Just be aware of the flavors that might creep in to the dish.

In place of the traditional meat filling, we'll use chickpeas and lentils. They make for a really hearty vegan meal, with tons of flavor! And it's healthier too. 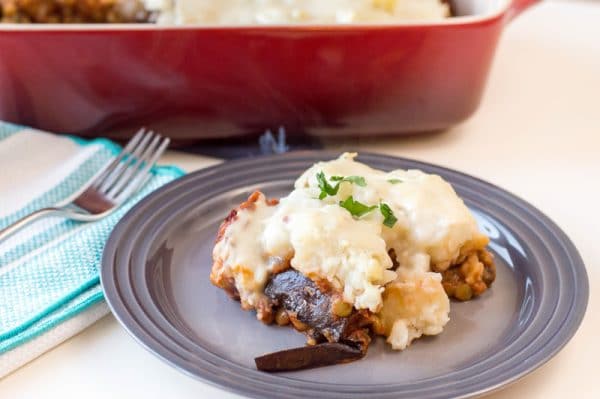 How to Make Vegan Moussaka

This recipe has a few more steps than my usual dishes, but I promise this vegan moussaka is so worth it!

Just look at all those fresh veggies ready to go. 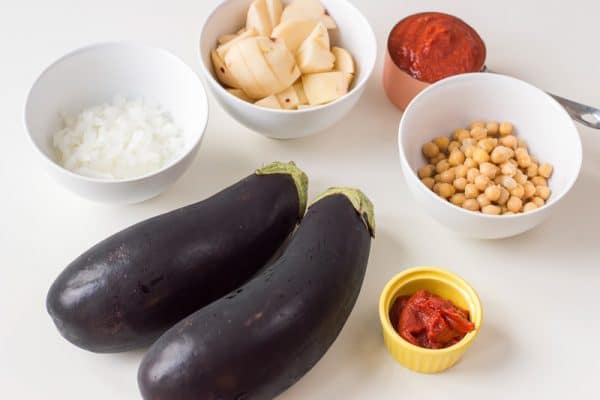 Let's start with the mashed potatoes.

Bring a pot of salted water to boil on medium-high heat. 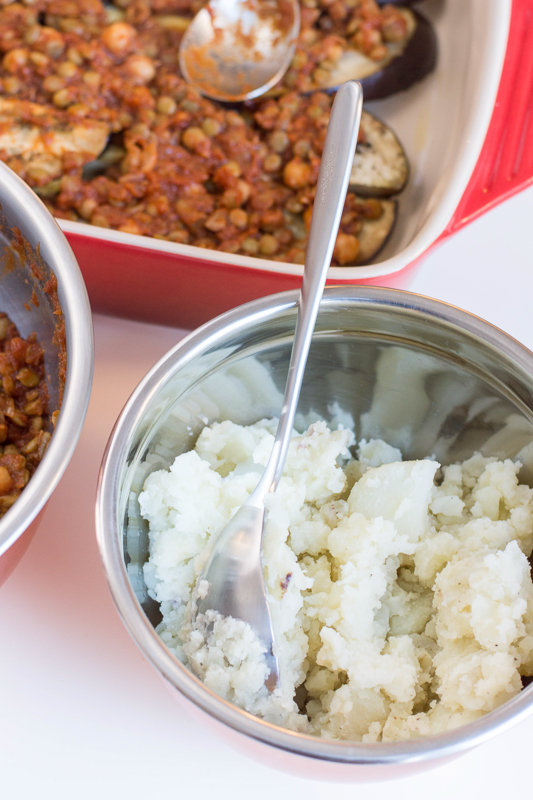 Add the potatoes and cook for 10 minutes, or until they are soft enough to mash. I like using a potato masher because it makes the process so quick and easy.

Mash the potatoes and mix with almond milk and olive oil. Then add salt and pepper to taste.

Then set the potatoes aside because we'll be using them later. Don't worry about the mashed potatoes getting cool because they'll go back into the oven later.

Next, let's prepare the eggplant. 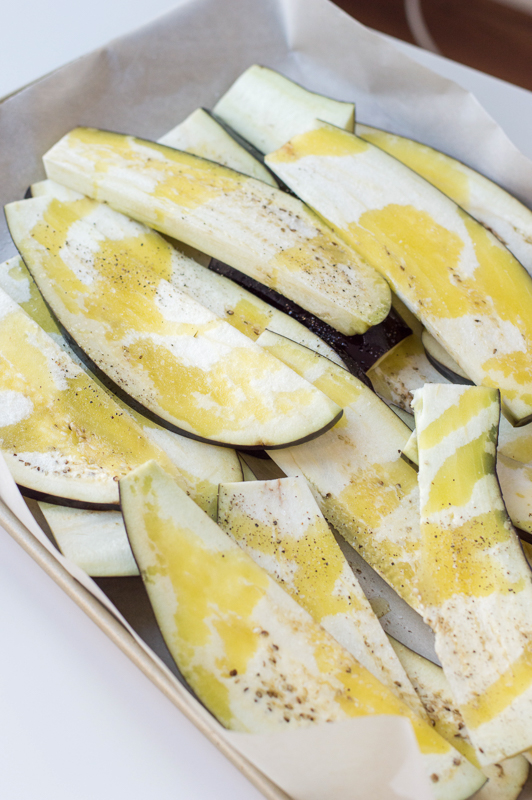 Start by preheating the oven to 350 degrees Fahrenheit. Slice the eggplant lengthwise into thick slices about ¼ inches thick.

Then put the eggplant on a baking sheet lined with parchment paper.

Sprinkle them with salt and pepper, and roast in the oven for 15 to 20 minutes. They will be done when they are softened and slightly browned. 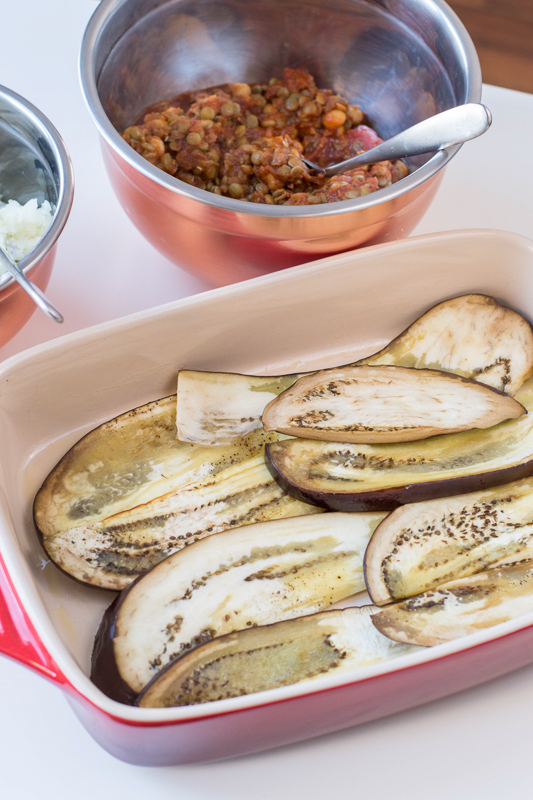 While the eggplant is in the oven, you can get the lentils ready. 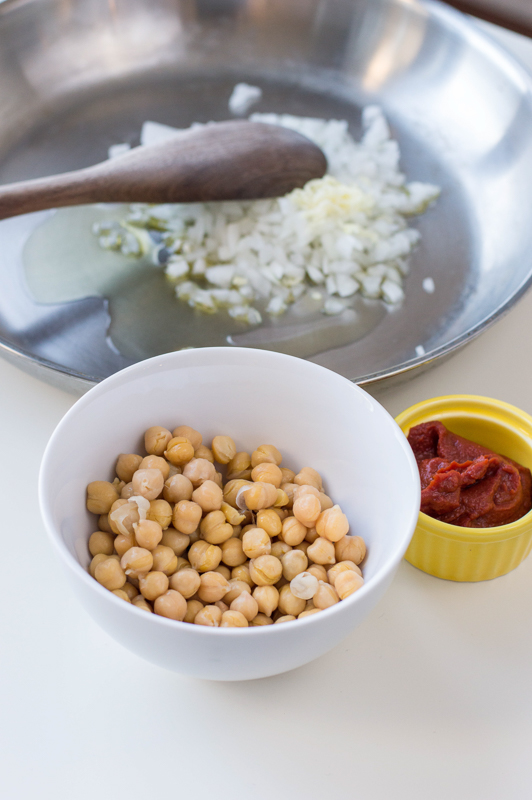 First, add olive oil to a large pot. Turn the heat to medium, and then add the onion and cook for 3 to 4 minutes. The onions should soften.

Then add the garlic and cook for another minute before stirring in the tomato paste, crushed tomatoes, smoked paprika, cayenne pepper, and red wine.

Simmer the mixture for 5 to 6 minutes, stirring occasionally. The liquid should cook out, leaving the mixture thick. Then stir in the chickpeas and lentils, and cook for 2 more minutes.

I suggest using pre-cooked lentils since it will take less time, but you can make lentils from scratch beforehand too.

Set the lentils aside.

Next, we prepare the Bechemal sauce. This is a white sauce typically used in French cuisine. Here, we make it vegan by using almond milk instead of regular milk. 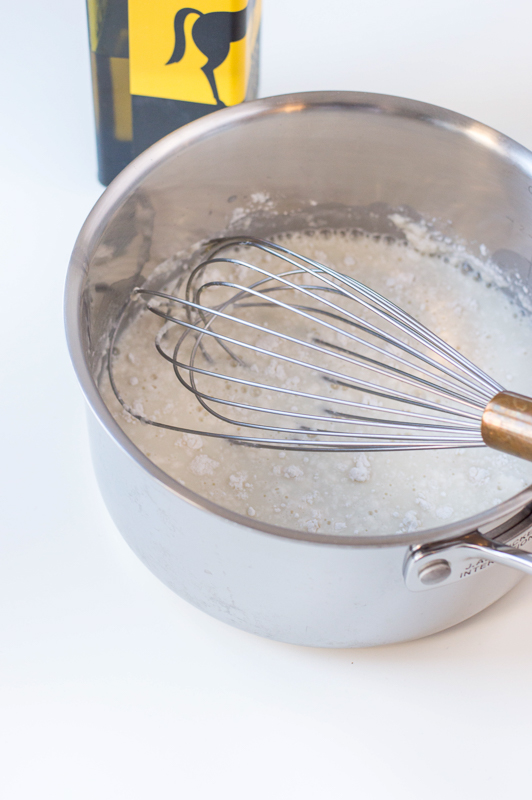 In a small pot, heat olive oil over medium heat. Then slowly add the flour, whisking it into the olive oil. Cook this for 1 to 2 minutes. You have to stir it constantly so it doesn't burn.

Then, slowly add the almond milk while whistling. Keep stirring until the sauces thickens.

Finally, stir in the smoked paprika, salt, and pepper.

Now that the various parts of the vegan moussaka are ready, we need to assemble the dish!

Get a large baking dish and spray it with non-stick cooking spray.

Add half of the eggplant to the bottom of the dish. 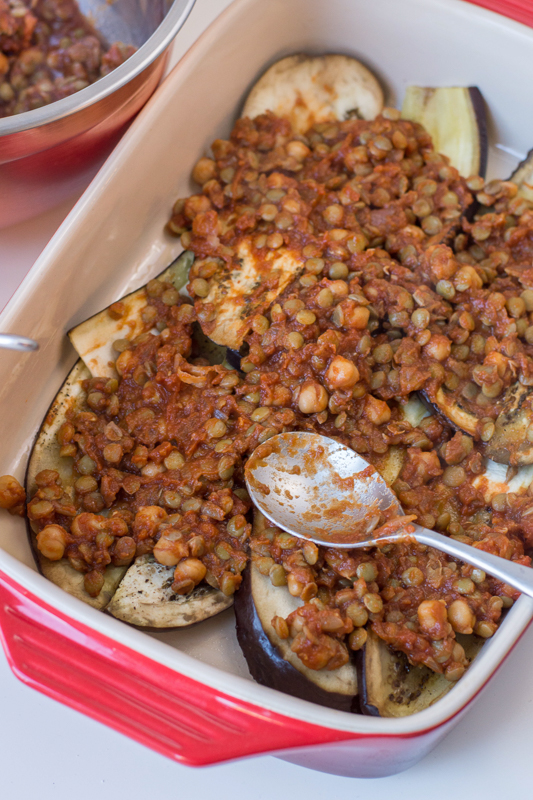 Then add half the lentil mixture on top of that, and repeat.

Then spread all the mashed potatoes on top, and pour the Bechemal sauce on top of the potatoes. 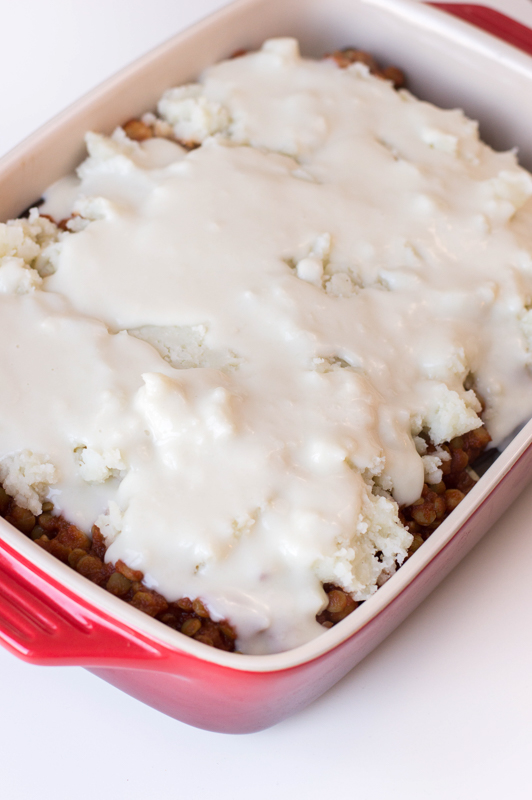 Put this in the oven for 30 minutes until the top browns.

Serve the vegan moussaka sprinkled with parsley or other fresh herbs. Yum! 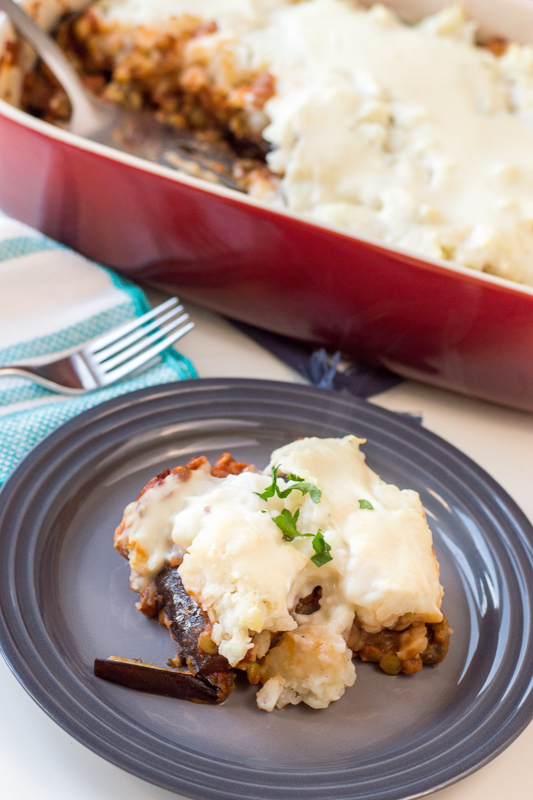 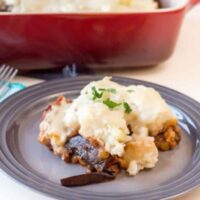