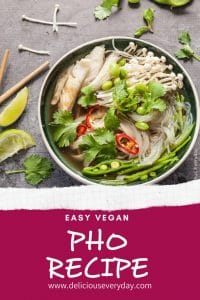 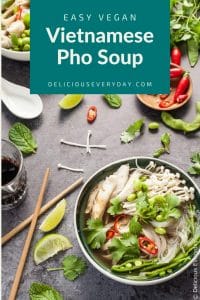 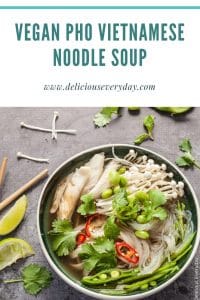 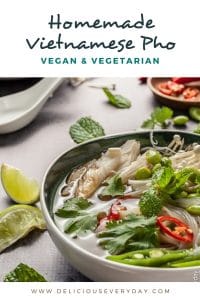 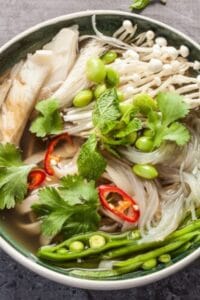 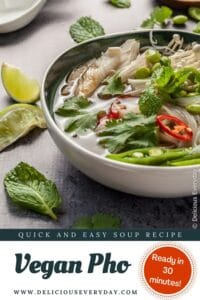 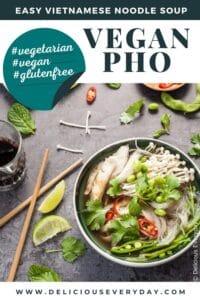 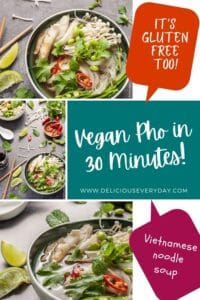 This incredible vegan pho recipe puts a new twist on the classic Vietnamese noodle soup. It's bursting with flavor, and simple to prepare in just 30 minutes. Plus, it's 100% vegan, vegetarian, and gluten-free!

I've always been a big fan of pho, the classic Vietnamese noodle soup. But we recently moved, and I've had trouble finding a vegetarian or vegan pho nearby.

It was such a bummer! So of course, I had to try my hand at creating my very own vegan pho recipe!

So, first things first. How do you pronounce "pho" anyway?

While it's been the subject of much debate, the correct way to say the name of this soup is "fuh".

So there - I just saved you a few seconds of embarrassment at your next dinner party. 😉

So what exactly is vegan pho?

Good thing you asked. It's heaven.

Pho is a traditional Vietnamese street food. It's a very specific type of noodle soup made with long, flat rice noodles.

In fact, the term pho technically refers to the noodles themselves. (These rice noodles are a good option for pho.)

Traditional pho soup is made with either beef or chicken broth, but our vegan pho recipe uses a hearty vegetable stock.

I promise, it's even more delicious than the classic!

This big slurpy bowl of noodles is then loaded up with all kinds of veggies and belly-warming spices.

This vegan pho makes a regular appearance in our dinner roster as it's one of my husband's favorite meals - and one of mine too. Even our son will dive into this!

While you're here be sure to grab this free printable vegan cheat sheet, packed with all my favorite easy vegan substitutions - so you can vegan-ize any recipe!

The key to this vegan pho, is a good quality vegetable stock.

I prefer to use homemade stock, as I make a big pot of it every weekend from the tops of my farmers' market haul.

But it's also totally fine to use store bought, especially if you want to get this recipe on the table in under 30 minutes! I prefer liquid based vegetable stocks over the stock cubes, as they are typically more flavorful.

This vegan pho isn't a soup that works well as leftovers. So I suggest only cooking the amount you need to serve it straight away.

To get the broth started, place a big soup pot on the stove over medium heat. Don't add the broth yet! Instead, add in the spices.

I used star anise, cinnamon stick, peppercorns, and cloves. You can experiment with different types of spices to customize this vegan pho to your liking!

When the spices are lightly toasted, add the vegetable stock.

Next, I like to char some spring onions over the gas cooktop. This is completely optional, but really gives them some amazing depth of flavor. And it only takes a minute.

Simply turn on the gas burner and hold them just above the flame (carefully) for a minute or so. If you don't have a gas burner - just skip this step - the pho will still be amazing.

Add the spring onions to the broth - along with some garlic, ginger, a bit of cilantro, and dried shiitake mushrooms. Bring the stock up to a boil, cover, and simmer for 20 minutes.

With just a few minutes left, add the bok choy and the noodles. Cook for about five minutes, depending on the noodles you are using.

The noodles are critical for this vegan pho recipe. They soak up all the flavors of the broth! I love to use these thin vermicelli rice noodles, but you can really use any style of long noodle that you prefer!

Just before serving - add in the oyster and enoki mushrooms, edamame, and snow peas. They really don't need any true cooking time, as the heat from the vegan pho is plenty to soften them up.

I love the contrast of the soft noodles with the crunchy snow peas, firm edamame and tender mushrooms.

For the mushrooms I've used a mix of enoki mushrooms and thinly sliced oyster mushrooms. But you can use any variety that you like and can find easily. Shiitake mushrooms always work well and are available in most grocery stores.

I also love that you can customize this vegan pho too. The most fun part of eating pho is getting to top it with your personal favorite toppings.

I like a lot of chili in mine, and a dash of soy sauce. I also like a big squeeze of lime, adding the lime wedge to the bowl for an extra bit of flavor.

If you are looking to add a bit more protein to your vegan pho, tofu would be a great addition. My Burmese Chickpea Tofu also works wonderfully in this recipe.

And if you need more soup recipes, check out my favorite vegan soups here.

And before you go - don't forget to grab a copy of my free vegan cheat sheet. It's packed with easy ideas to vegan-ize just about any recipe! 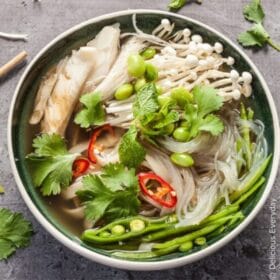 1. I like to use a mix of black, green and red peppercorns as they each impart their own flavor. If you only have black they are perfectly fine to use. 2. Homemade vegetable stock is my preference when making this as you can control the amount of salt. If you are using a store bought stock opt for a low salt version. 3. You can usually find edamame in the freezer section of your supermarket.