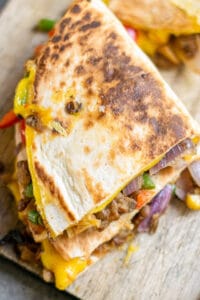 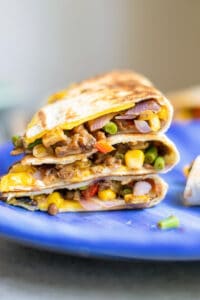 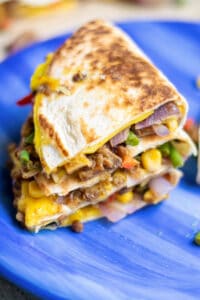 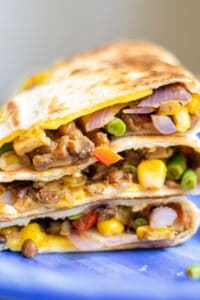 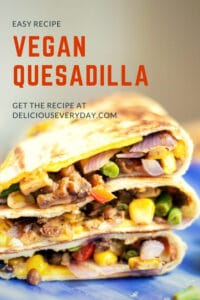 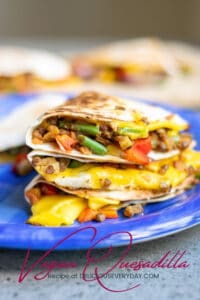 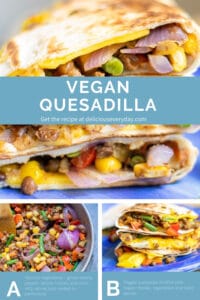 This Vegan Quesadilla recipe is packed with savory vegetables and cooked to perfection! It’s Mexican-inspired and makes for a hearty breakfast.

This veggie quesadilla is stuffed with vegan cheese, vegetables, and tasty spices.

To make these quesadillas, all you need to do is fry up the vegetables with spices, add them to a tortilla with vegan cheese, and then toast them.

This vegan quesadilla recipe is...

How to Make Vegan Quesadillas

These veggie quesadillas can keep for 3 days in the fridge. When you’re ready to eat them again, you can put them in a nonstick pan on low heat. This will warm the quesadillas without burning the tortillas.

Or you can just pop them into the microwave to heat them up.

Some other great tortilla flavors to try are sundried tomato, spinach, cilantro, and roasted garlic.

You can buy these flavored tortillas, or you can make your own.

You can mix up this recipe a little by replacing potatoes with sweet potatoes or roasted cauliflower.

If you have some green onions in the fridge, just chop them up and throw them in the pan. This will add a little extra flavor to your veggie quesadillas!

Divide the dough into 16 parts, and then roll them out into tortillas. Cook the tortillas in a pan on medium-high heat for 2 minutes on each side. Then they’re ready to serve!

After you’ve finished making your tortillas, you can top them with some delicious toppings. Some great Mexican-inspired toppings include lime juice, vegan sour cream, cashew-lime cream, and chopped cilantro.

To make the vegan cashew-lime cream, you soak 1 cup of raw unsalted cashews in ¼ cup of water over night. Then drain the liquid and place it in a blender along with the zest of 1 lime, the juice of 2 limes, and ½ tsp of salt. Blend until the ingredients are smooth and creamy. Serve over hot tortillas and save the extra in the fridge.

While you're here, be sure to grab my free e-cookbook packed with reader favorite vegetarian recipes! 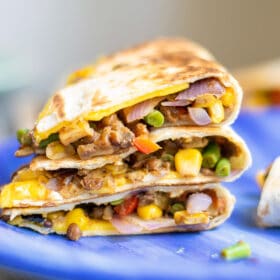 Store up to 3 days in refrigerator.