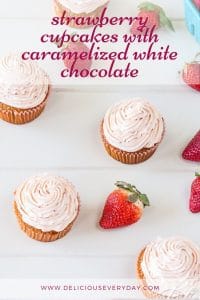 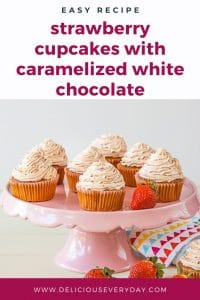 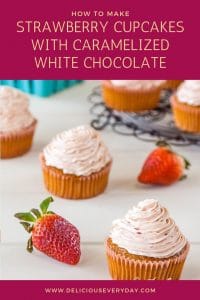 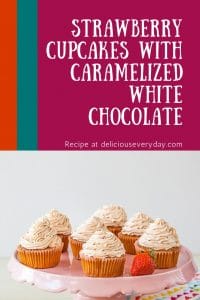 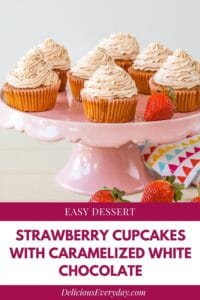 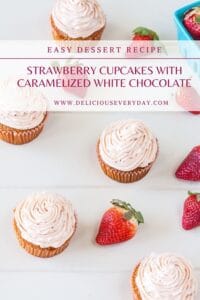 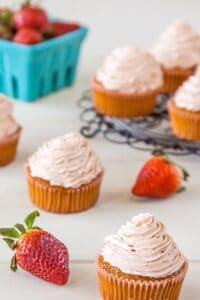 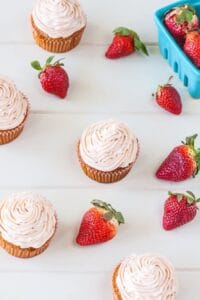 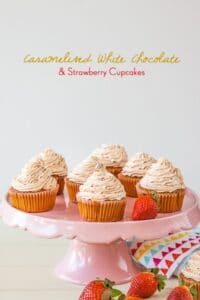 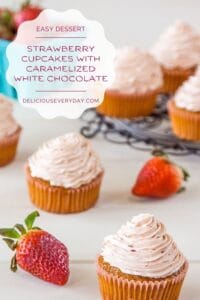 Have you ever tried caramelized white chocolate? If not, you're in for a delicious surprise with these strawberry cupcakes! With a soft Italian meringue buttercream frosting and surprising twist to to the cake, these cupcakes will make you wonder how you've lived so long without them. 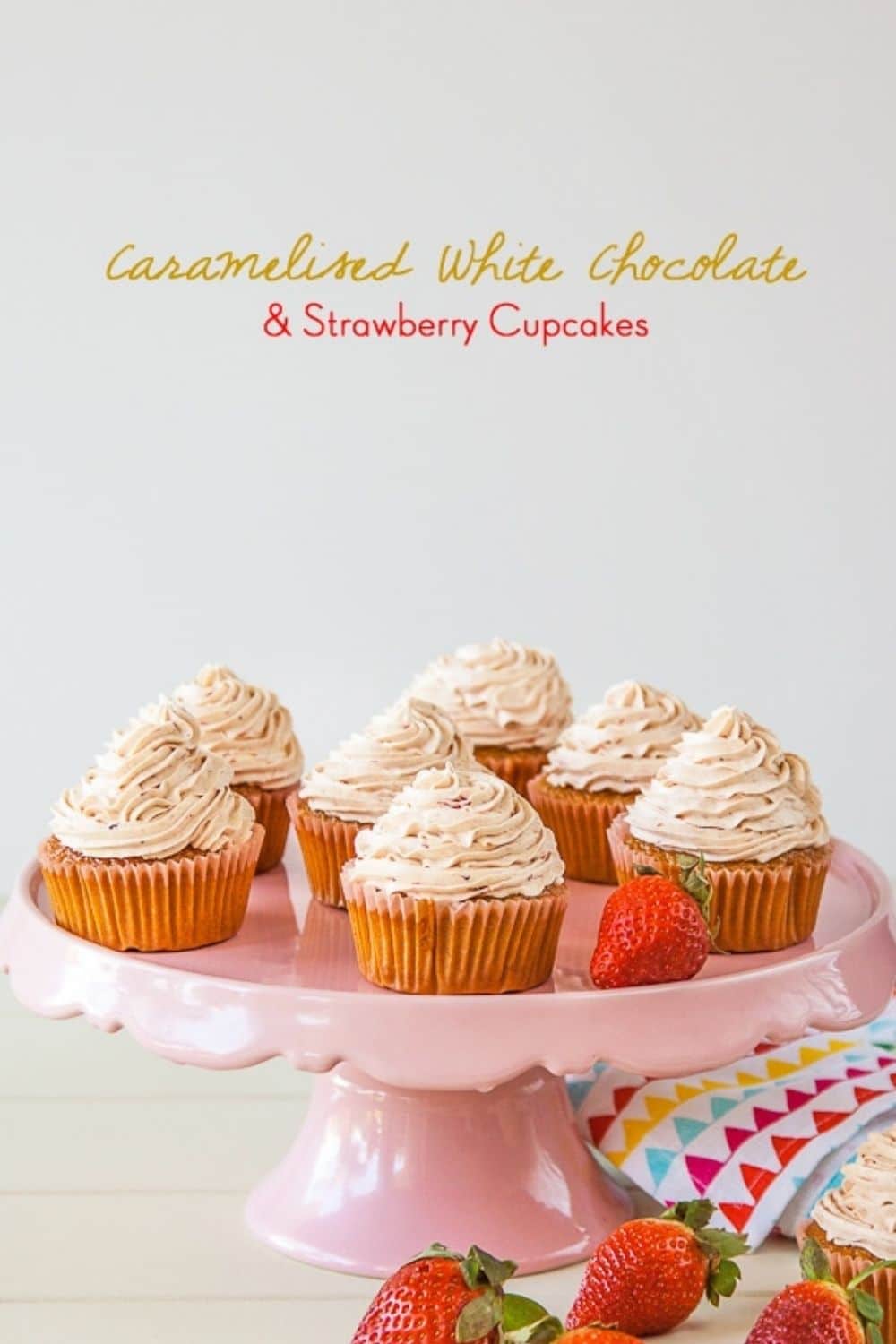 The secret ingredient in these adorable little strawberry cupcakes is the caramelized white chocolate. If you've never tried it, this is going to be fun!

Gone is the cloying sweetness, and in it's place is the most delicious caramel flavor. Think buttery dulce de leche. And if you think you don't like white chocolate — as I did — this stuff will change your mind.

It's the perfect match for these strawberry cupcakes! 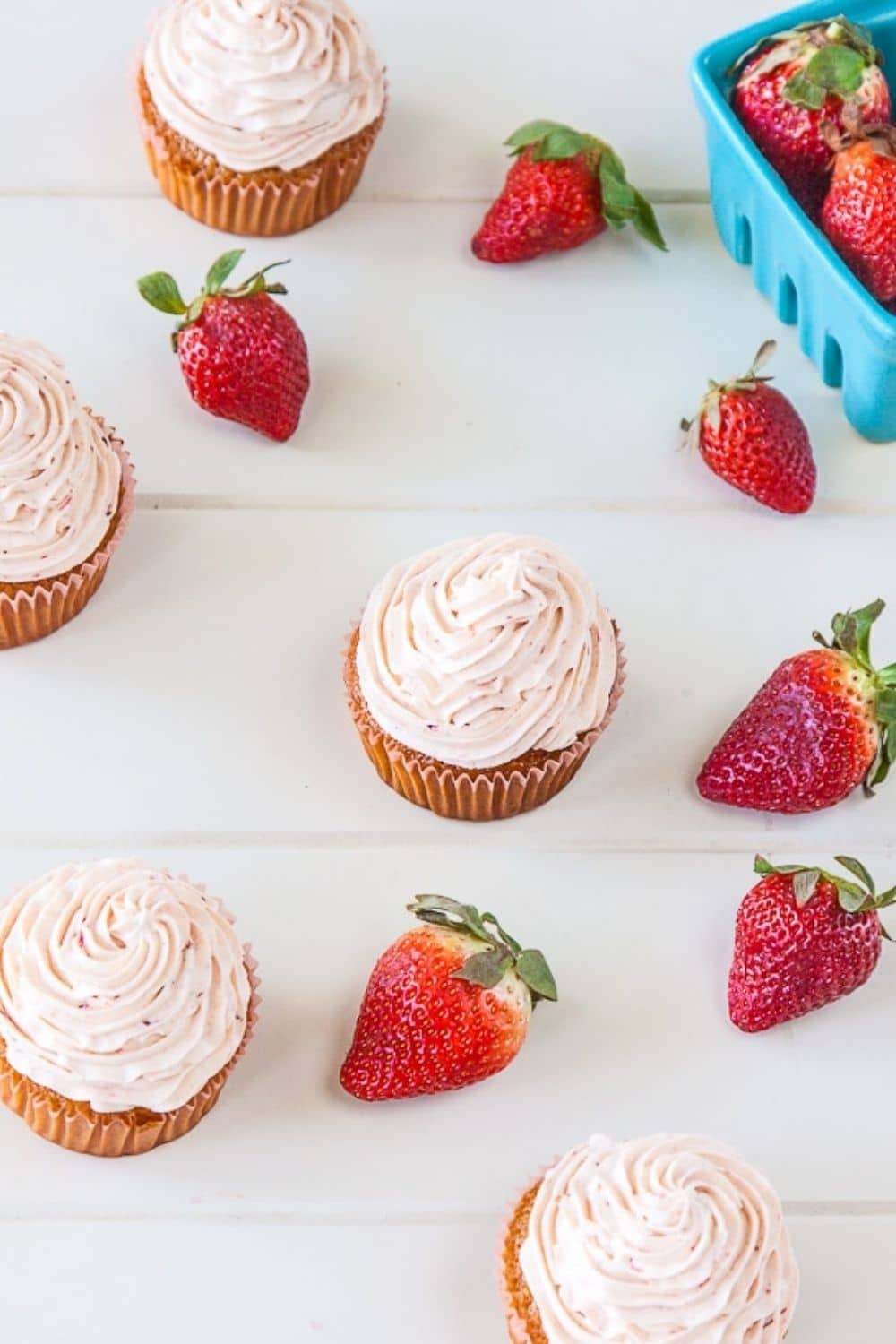 The key to this recipe is to use fresh strawberries, and good quality white chocolate made with cocoa butter, not vegetable fat. Read the ingredients in your white chocolate to see which it uses. The higher the cocoa butter percentage the better, as you will have a smoother result. I used Cadbury's White Chocolate Melts, which contains 29 percent cocoa butter.

When roasting the chocolate, make sure to stir it frequently. The chocolate will go through several stages: melted, firm, and a deeply golden, oozy caramel. If the chocolate looks like it's seizing up, don't fret. Give the mixture a stir and it will be okay. Be patient, and you will be rewarded. Just try not to eat it all while it's cooling!

For the frosting, I went with a roasted strawberry buttercream. The roasted strawberry frosting works beautifully with the caramelized white chocolate in the cake. And the result — according to my husband at least — is that these strawberry cupcakes are the best cupcakes I've ever made.

And I have made a LOT of cupcakes. 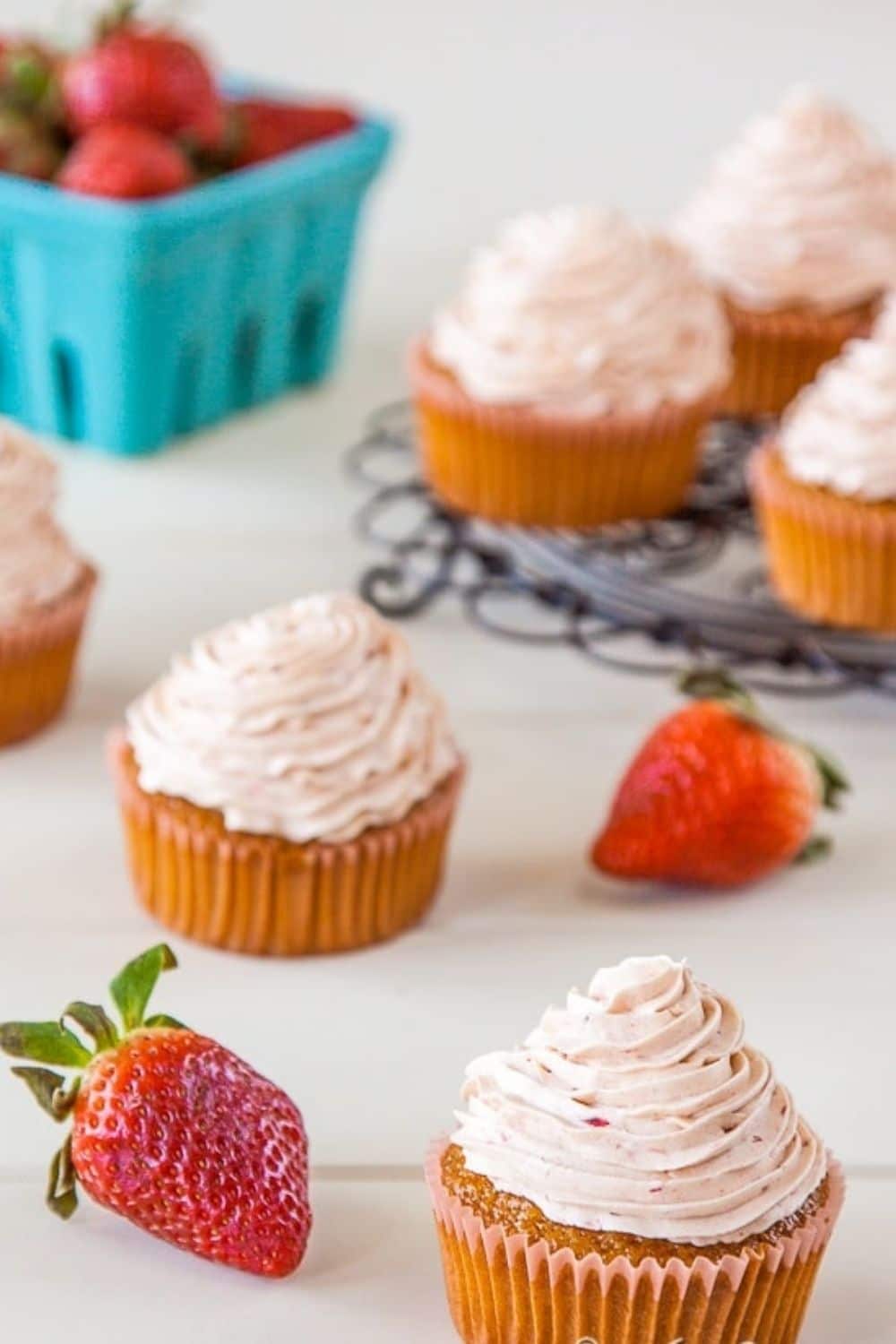 Cupcakes made from scratch are always going to take more time to make than a boxed cake and packaged frosting, but in the end it will all be worth it. So get ready to dedicate yourself to this amazing strawberry cupcake recipe, and you'll be glad you did.

First, we'll start with roasting the white chocolate. It will roast for 60 minutes at 250 degrees Fahrenheit. Make sure that every 10 minutes you stir the chocolate so that eventually it turns into a delicious caramel color.

While that's happening, prepare you strawberries. Place the strawberries in a baking dish with two teaspoons of sugar and let them roast as well, for 30 to 40 minutes. You'll know they're done when they collapse and create a pool of juices. Then set them aside to cool.

Then comes time to make the cake. Increase the oven heat to 340 degrees Fahrenheit. Then while it's preheating, take the cooled (but still melted) white chocolate in a bowl and mix it with the melted butter. In a separate bowl, whisk the eggs and brown sugar, add the chocolate and melted butter mixture, and then whisk all those ingredients together.

Now, you have made the cake! Spoon the mixture into your cupcake liners and bake for 15 to 17 minutes. Then set your cupcakes on a cooling rack.

Put the water, golden syrup, and sugar in a saucepan and mix until combined, then bring to a boil. When the mixture reaches 248 degrees Fahrenheit (use a sugar thermometer to gauge this), remove it from the heat. Then add your egg whites and whisk. Slowly pour your sugar into the bowl while still whisking. You'll keep whisking for about 10 minutes, or until the mixture is cool.

Next comes the essential ingredient to all buttercream frosting: butter! Add a third of the butter and whisk it completely into your mixture, and continue adding and whisking until you've added all the butter. Turn your electric whisker on high to make the frosting nice and fluffy.

But remember those strawberries you roasted? Now is their time to shine! Put them in a food processor and add frosting. Mix them into the butter mixture to make your strawberry-buttercream frosting. Put the frosting in a piping bag, and frost those cupcakes up! 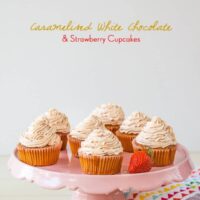 You're in for a delicious surprise with these strawberry cupcakes! The cake is infused with an incredible caramelized white chocolate, and then topped with a homemade strawberry-buttercream frosting. These cupcakes will make you wonder how you've lived so long without them.
5 from 4 votes
Print Pin Save Saved!
Course: Dessert
Cuisine: Dessert, vegetarian
Keyword: strawberry cupcakes
Prep Time: 2 hours
Cook Time: 1 hour 15 minutes
Total Time: 3 hours 15 minutes
Calories: 355kcal
Author: Delicious Everyday
12

It’s important the Italian meringue cools down enough before you begin adding the butter. The bowl of the mixer should be cool to touch. I like to set a timer for 10 to 15 minutes while whisking the egg whites and once the time is up and the bowl is cool I begin adding the butter. Add the butter to soon and the frosting could melt and turn the meringue into a soupy mess. If that happens don’t stress. Simply refrigerate the mixture in the mixing bowl for an hour and begin whipping again before adding the remaining butter and flavouring.