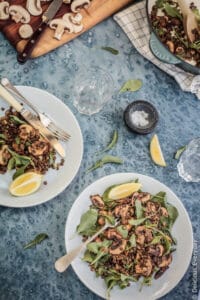 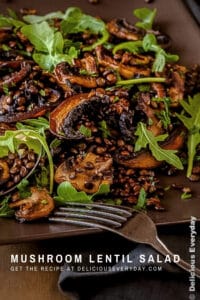 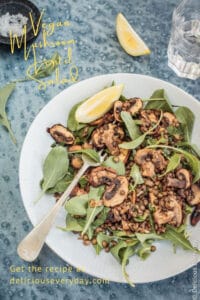 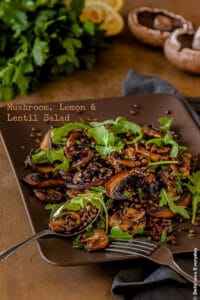 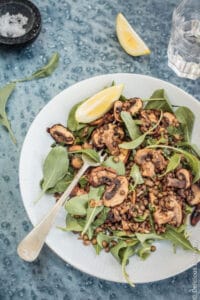 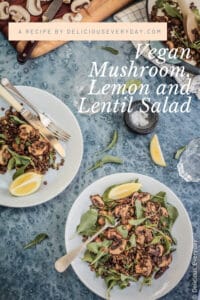 This hearty Vegan Lentil Salad is a nutritional powerhouse packed with French lentils, mushrooms, and lemon. And it comes together fast with just a handful of ingredients which you probably already have in your pantry!

While this may look like a winter dish, the tart brightness and freshness of lemon really brings this mushroom lentil salad into summer.

This vegan lentil salad is healthy, light, easy and perfect to bring along to your next bbq or summer picnic.

Vegan and gluten free, and made from ingredients you are already likely to have in your fridge or pantry it's sure to satisfy everyone!

Experiment with your favorite mushrooms.

In this salad, I've used a mix of swiss brown (crimini) mushrooms and button mushrooms (champignons). Really though you can use whatever variety of mushrooms you prefer or have on hand.

Meaty portobello mushrooms would also be lovely in this vegan lentil salad, as they have a richer, deeper, almost meaty flavor. King brown mushrooms would be great too, or even a mix of wild mushrooms.

Caramelize the mushrooms over high heat for the best flavor.

The secret to this vegan lentil salad is cooking the mushrooms over a high heat to allow them to caramelize slightly.

The key to lovely caramelized mushrooms is to not add salt to the mushrooms while cooking them!

Adding salt will cause the mushrooms to release water and will prevent them from caramelizing, resulting in flabby watery mushrooms, which is not what you want.

The mushrooms will release a little moisture as you cook them, but much less so than if they were seasoned.

The other key to this mushroom lentil salad is seasoning. A simple salad, such as this, all hangs on the dressing.

Season with a couple of pinches of salt, toss to combine, taste and add more until the flavors really start to come alive.

If serving this salad straight from the fridge you will need a little more seasoning than if you were serving it at room temperature.

Cook the lentils in vegetable stock.

Another tip I like to use is to cook the lentils in vegetable stock, to add a lovely depth of flavor.

Dress up your vegan lentil salad.

There are plenty of ways to dress up this Mushroom Lentil Salad to make it your own.

If you aren't vegan, add some crumbled feta. Or even better, fry up some haloumi and place it over the top.

If you are vegan, try adding thinly sliced celery or radish or replacing the rocket (arugula) with oven baked kale chips for a little crunch.

This recipe first appeared on Delicious Everyday way back in 2013. It's been a reader favorite, which is why I've updated it for 2019. While the recipe remains the same, I've added some tips and tricks. And of course new photos.

Check out the original photo below. Pretty horrible right? I know this recipe isn't the most visually appealing, but I think the new photos do it a little more justice 🙂

And here's what this same vegan lentil salad looks like today. A little better, huh?

If you like this recipe, make sure you check out my new five-minute vegan lentil salad. It's a surefire way to get a tasty dinner on the table quick!

And if you're a big mushroom lover, be sure to check out these recipes: 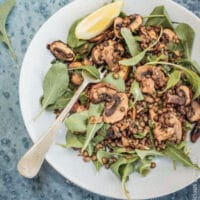 Don't slice the mushrooms too thinly. You want them to have a bit of substance and also you don't want them to dry out when they are cooked over a high heat.