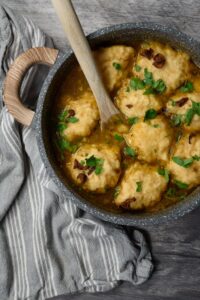 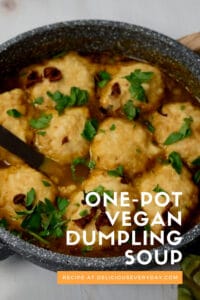 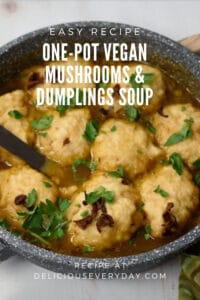 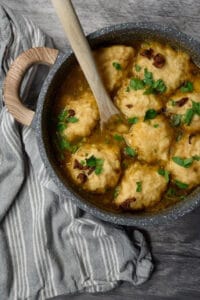 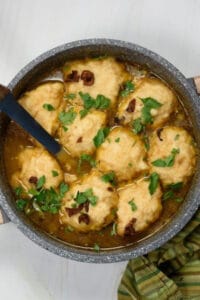 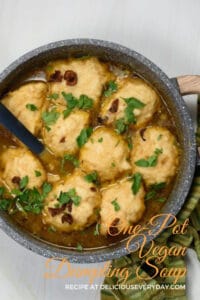 These vegan soup dumplings are a completely plant-based version of the classic chicken and dumplings. Homemade vegan dumplings are cooked in a flavorful mushroom broth, and sprinkled with fresh herbs. This recipe is 100% vegan and vegetarian friendly!

Who doesn't love a big, piping hot bowl of soup on a chilly night? It's one of life's little pleasures.

Lately, I've been experimenting with all kinds of delicious vegan soups. And so I couldn't resist vegan-izing the classic chicken and dumplings.

No one will miss the meat in this vegetarian version, because it's packed with so much hearty flavor from the savory mushroom broth and fresh herbs.

In fact, these dumplings are so good, that I've included them in my brand new cookbook - Weeknight One-Pot Vegan Cooking.

Have you heard about this, yet? It's a 100% vegan cookbook, packed with 75 one-pot vegan recipes.

Yep. Every single dish can be prepared in a single pot or pan - making both cooking and cleanup a breeze. I don't know about you, but I'm always on board with less dishes.

Check out the Weeknight One-Pot Vegan Cookbook for more easy vegan recipe ideas that are perfect for busy weeknights.

Use a large, slotted spoon to turn the dumplings over during cooking. It will be so much less messy since you won't be accidentally scooping the broth as you work.

I used dried shiitake mushrooms for this recipe, but you can experiment with any variety you prefer. Porcini mushrooms would be a great choice also.

Make this recipe gluten-free, by substituting gluten-free baking flour for the all purpose flour in the dumplings.

Use any plant-based milk you like for the vegan dumpling batter. I prefer almond milk, but soy or oat milk would work fine too.

For more tips on vegan-izing your favorite recipes, be sure to grab a copy of my free vegan substitution cheat sheet! It's packed with lots of handy swaps to turn any recipe vegan. 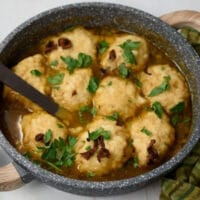