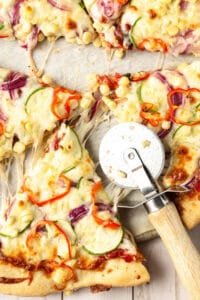 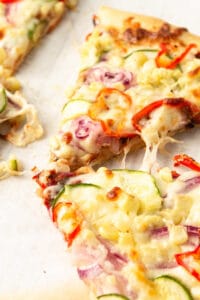 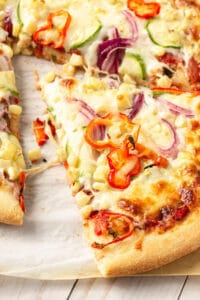 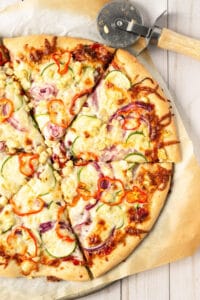 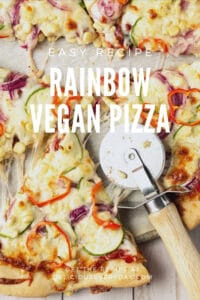 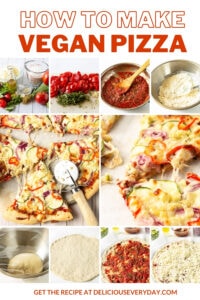 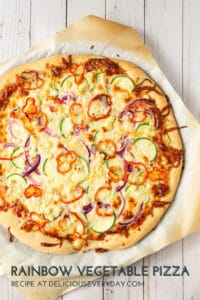 This Vegan Pizza is super tasty and topped with colorful veggies. But don't let it intimidate you—it’s easier to make than you’d think!

All it takes to make this rainbow vegetable pizza is the dough, sauce, vegetables, and some vegan cheese!

This vegan pizza recipe is...

Serve it with a nice side salad like this Cucumber Tomato Salad or this 30-Minute Quinoa Tabbouleh Salad!

How to Make Vegan Pizza

Don’t Over Knead the Dough

Make sure you don’t over knead the dough. If you do, it will lose its stretch. That means that once you go to stretch it, it will likely rip.

And after it’s baked, it will be dense and tough.

So make sure to follow the directions if you want the perfect dough!

A pizza stone will make your crust crispier and help it expand better in the oven.

If you decide to use a pizza stone, then put the stretched out dough onto the stone before putting on the toppings and putting it into the oven to bake.

When using parchment paper, make sure you flour it before putting the dough onto it.

Using the parchment paper will make it easier for you to transport the pizza, too!

You can use this recipe to make two small pizzas instead of one large one. Just make sure that you have more cheese to cover the two pizzas.

If you use this dough recipe to make two pizzas, just know that your crust will be thinner the larger you choose to stretch out each pizza.

There are already so many yummy toppings on this pizza, but you can always add more!

Some other veggies that will go great on this vegan pizza are mushrooms, yellow peppers, green peppers, olives, jalapeños, sliced tomatoes, and artichokes.

What is vegan pizza made of?

Vegan pizza is basically just your regular old pizza, but with vegan cheese!

Vegan cheese is often made from a combination of nuts, vegetable oil, nutritional yeast, and tapioca flour.

You can make your own, or you can buy premade vegan cheese.

While you're here, be sure to grab my free e-cookbook packed with reader favorite vegetarian recipes! 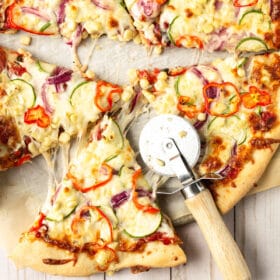 This recipe can also make 2 smaller pizzas if you increase the volume of cheese slightly. This will make a slightly thinner crust if dough is spread to two 11”/27.5cm rounds.