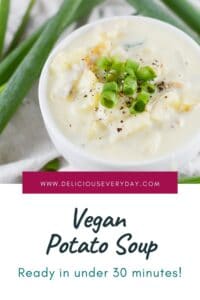 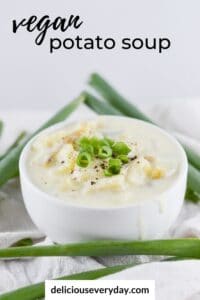 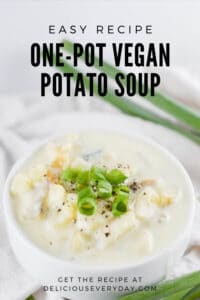 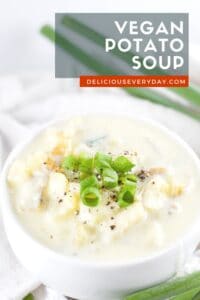 This simple one-pot vegan potato soup is simple, creamy and delicious. Tender potatoes come together with fresh chives and almond milk to make the perfect comfort food. A simple and quick recipe, even for the busiest of evenings.

There’s a reason it gets that title, after all. And perhaps the most notorious type of food to dominate the comfort food category is soup.

I make a lot of soups and some of my favorites are Vegan Carrot and Coriander Soup or Spicy White Bean Pumpkin Soup. In fact, I have a whole collection of vegan soups in my recipe box!

And this potato soup has quickly become a favorite in my house. That's because it's so easy to cook up in a single pot.

You know I love those one-pot recipes! In fact, I wrote a whole cookbook full of them. 😉

How to Make Vegan Potato Soup

Scroll down for the full printable recipes with measurements and detailed instructions.

Coconut Milk Substitutes - If you’re not a fan of using coconut milk, you can use another substitute that will work like heavy cream would. For example, you can mix one part vegan unsalted butter with three parts vegan milk. You can also do two parts dairy-free milk and one part oil.

Grab the Cheat Sheet! - If you're a fan of vegan cooking, make sure you snag a free copy of my vegan substitution cheat sheet. It's packed with my favorite easy substitutions to vegan-ize your favorite recipes.

Make it spicy - Add in half of a tablespoon of crushed red peppers or slice up a jalapeno and add it to the pot. This will add a nice spice to the soup, if desired.

Storage - Store this potato soup in the fridge or freezer in an airtight container. Will last in the fridge up to 5 days and in the freezer up to a month.

How Do You Make Potato Soup Thicker?

If you want to thicken it after preparing as-is, you can mix some cornstarch into a dab of water and mix that it into the soup.

You can also always allow your soup to simmer longer in order to evaporate some of the extra liquid. This should help make it a bit thicker.

If you want to make it thinner after preparing, you can add more almond milk or even a dab of water. Just know the water could cause the flavor to dilute a bit.

Can You Freeze Potato Soup?

Yes, you can definitely freeze potato soup. However, here’s what you’ll want to know if you decided to freeze it.

Potatoes will often change their texture a bit once frozen and then thawed. Many people don’t mind the texture.

I would suggest freezing a bit first, and then trying it to see if you’re ok with the outcome of the soup. That way, you don’t waste your entire batch of soup.

If you're a soup lover, be sure to check out my full collection of the best vegan soups. Here are a few favorites: 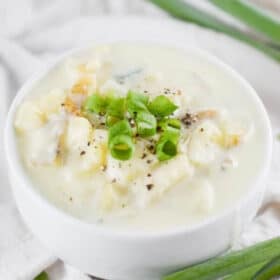